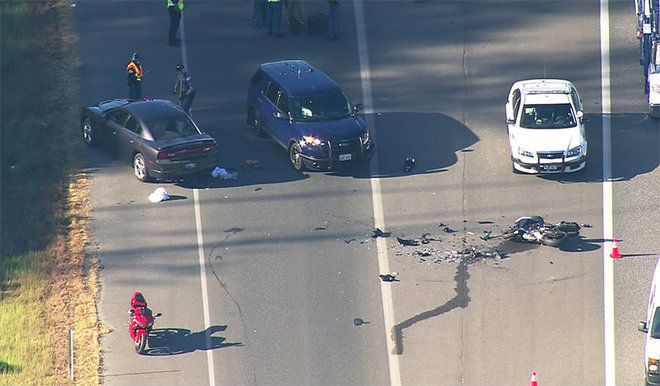 A motorcyclist was killed in a crash following a devastating string of events Friday morning on State Route 16 near Purdy, Washington State Patrol troopers said.

According to KOMO, troopers received multiple reports of a possible DUI-related crash on SR-16 near the onramp at Burley Olalla Road just after 6 a.m. Friday. The crash involved multiple vehicles and blocked the entire right lane of the highway, resulting in a sizeable traffic backup.

In an apparent effort to get around the traffic jam, a couple of cars stuck behind the collision tried to make illegal U-turns and began driving back up the on-ramp in the wrong direction. Two motorcyclists began driving on the shoulder of the on-ramp to pass the stalled traffic when one of the vehicles making the illegal U-turn collided with one of the motorcyclists.

“One of the motorcycles obviously didn’t see the car making the U-turn and collided in the gore point,” said Trooper Russ Winger with the Washington State Patrol. “Totally avoidable fatality. Driver impatience led to this fatality.”

Winger says the motorcyclist was pronounced dead at the scene of the collision, adding that it was unclear if the driver of the vehicle which made the illegal U-turn was injured or not.

Illegal U-Turns and Passing on the Shoulder 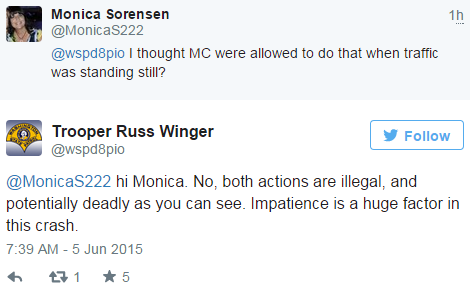 Trooper Winger pointed out that both drivers were committing infractions at the same time when the collision occurred. In fact, Winger even went as far to openly correct one Twitter user who questioned whether the motorcyclist was legally passing traffic on the on-ramp:

The Washington State Patrol is still investigating both the fatal collision and the initial crash that caused the massive traffic jam, which troopers believe may have involved an impaired driver. Winger did indicate to reporters that the WSP will be recommending vehicular homicide charges for the driver who crashed into the motorcyclist.

Determining liability for an accident such as this one may prove to be difficult due to the fact that, according to Winger, both parties involved committed infractions that eventually contributed to the motorcycle accident. Investigating the scene and interviewing witnesses, in addition to collecting any relevant evidence, will be a significant hurdle when it comes to pursuing a personal injury claim.