2/25/16 - Today attorney Chris Davis of Davis Law Group in Seattle served the Office of Risk Management for the State of Washington the mandatory Standard Tort Claim Form on behalf of Veronica Medina-Gonzalez, mother of Ceasar Medina who was killed by an inmate that was released due to the Washington State Department of Corrections’ “computer glitch”.

MEMBERS OF THE MEDIA: Please respect the privacy of the victim’s family and direct all media requests to Davis Law Group.  Davis Law Group will do its best to accommodate press inquiries and requests for interviews with the victims and/or her attorney.

In a letter that accompanied the claim form Davis wrote: 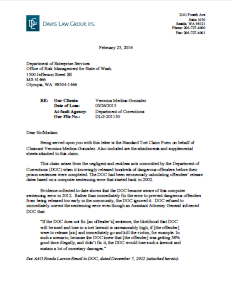 This claim arises from the negligent and reckless acts committed by the Department of Corrections (DOC) when it knowingly released hundreds of dangerous offenders before their prison sentences were completed. The DOC had been erroneously calculating offenders’ release dates based on a computer sentencing error that started back in 2002.

Evidence collected to date shows that the DOC became aware of this computer sentencing error in 2012. Rather than immediately fix the error to prevent dangerous offenders from being released too early in the community, the DOC ignored it. DOC refused to immediately correct the sentencing error even though an Assistant Attorney General informed DOC that:

“If the DOC does not fix [an offender’s] sentence, the likelihood that DOC will be sued and lose in a tort lawsuit is unreasonably high, if [the offender] were to release [sic] and immediately go and kill the victim, for example. In such a scenario, because the DOC knew that [the offender] was getting 58% good time illegally, and didn’t fix it, the DOC would lose such a lawsuit and sustain a lot of monetary damages.”

Thereafter, on May 14, 2015, the DOC erroneously released dangerous offender Jeremiah Smith a/k/a Glenn Akers. We believe that Mr. Smith had been in prison since 2010 for felony robbery, burglary and assault convictions.

12 days later, on May 26, 2015, Jeremiah Smith attempted to rob a tattoo parlor in Spokane, Washington. Smith had a gun. While performing the robbery, Smith senselessly shot and killed a teenager named Ceasar Medina. Ceasar was survived by his mother and siblings. 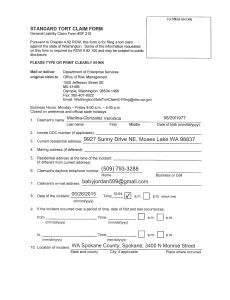 The DOC’s early release errors were brought to the attention of Washington State Governor Jay Inslee on December 17, 2015. Governor Inslee then hired Carl Blackstone and Robert Westinghouse of the Yarmuth Wilsdon law firm to conduct an independent investigation of how this problem occurred, who was responsible, and how similar problems could be prevented in the future.

“The early release of thousands of prisoners over 13 years was caused by a series of errors coupled with bureaucratic incompetence, systemic failures of process and management, and an inexplicable failure both on an institutional and individual level to appreciate the fact that releasing even one inmate early, let alone thousands, undermined the core mission of the Department of Corrections, which is to protect the public.”

Ceasar Medina’s mother, Veronica Medina-Gonzalez, is filing the wrongful death claim in large part because DOC’s acts and omissions were outrageous and inexplicable. Ceasar’s death was easily preventable had the DOC done its job and had it not knowingly released dangerous offender Jeremiah Smith from prison before his sentence had been satisfied.

Due to the egregious wrongful acts committed by the DOC, as well as the magnitude of the harms it has inflicted on our clients, we are submitting a claim in the amount of $5,000,000.