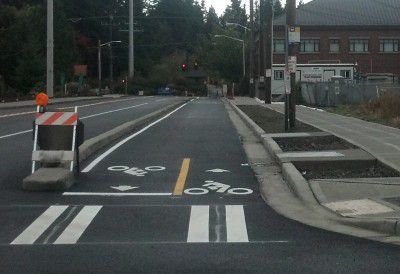 Another recent string of bicycle accidents in the Seattle area has drawn additional attention to the city’s need for improvements in transportation infrastructure, particularly in high-traffic areas that are popular routes for local bicyclists.

There have been three accidents on Dexter Avenue alone in the last month, two of which resulted in hospitalization for the bicyclist. Dexter Avenue – which is marked extensively with bike lanes and warnings to motorists – is a very popular route for bicyclists navigating the downtown area, and the recent spike in bicycle accidents suggests how ineffective painted bike lanes may be in preventing injuries to bicyclists.

According to a Seattle Times news article, the city of Seattle is in the process of revamping its Bicycle Master Plan, which was originally adopted in 2007. The goal of that plan has remained to reduce the number of bicycle collisions by 33 percent while simultaneously increasing bicycle ridership three-fold by the year 2017.

Cycle tracks – which are specially-designed bike lanes that separate bicyclists from motor vehicle traffic by an elevated physical barrier – are one primary area of focus for legislators when it comes to improving safety for bicyclists. Several studies on the issue have shown that the curb-like barrier is much more effective in reducing the number of bicycle collisions than a painted lane.

Behind the Curve in Preventing Bicycle Accidents

Washington state has repeatedly been recognized as the most bicycle-friendly state in the country by the League of American Bicyclists, but Seattle itself still has a long way to go when it comes to the effectiveness of the overall infrastructure that supports bicycle use. Portland and Vancouver, B.C. are two cities that many experts say should be used as a model for cities looking to provide more effective options to bicyclists.

Just recently, Seattle Councilmember Richard Conlin was riding his bike in Seattle when he was involved in a collision with a car at 34th Avenue and East Pine Street. Conlin suffered a broken right shoulder – among other various injuries – and the driver was cited for making an illegal U-Turn.

Safety advocates and legislators alike hope that these improvements can lead to Seattle being one of the model cities of the future, instead of trying to play catch-up with places like Portland and Vancouver.