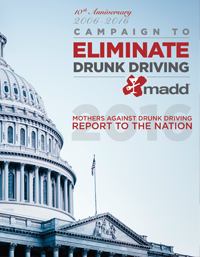 There has been much debate about the legal drinking age in the United States compared to the rest of the world. With help from MADD, or Mothers Against Drunk Driving, the most common misconceptions are discussed and debunked by shedding light on the real issues surrounding underage drinking.

If a person turns 18 and is officially an adult, they should be able to drink alcohol

Different age limitations are set for different reasons. Just like being able to drive at 16 and vote at 18, drinking at 21 makes sense especially when there are health benefits to waiting until that certain age. Also, it is not a rights and responsibility issue; it’s a public health and safety issue.

European countries like France, where alcohol is a part of their culture have fewer alcohol-related problems

There is a popular misconception that countries abroad, particularly in Europe that have more lax drinking laws (or none at all), have fewer problems, but this is completely false. It is true that in most European countries, alcohol is integrated into their culture at an early age, but that does not mean they are immune to the harmful effects of alcohol.

European youth may be at less of a risk for drunk driving accidents because they drive less frequently, have better public transportation, and stricter laws and penalties. But a U.S. Department of Justice study concluded that young Europeans tend to binge drink more than American teens. The consumption of alcohol, often and in large quantities, especially started at an early age can lead health and behavioral issues.

Our parents drank when they were young and they are fine

Peoples’ parents have different experiences when it comes to drinking and just because they may not have lost someone because of alcohol does not mean that it cannot happen to their children. Alcohol is the number one drug of choice among the youth, killing more than all other illicit drugs combined. The earlier kids start drinking, the more likely they are to become dependent on alcohol and drive drunk as adults.

If a parent is supervising, it’s safe to serve alcohol to minors

There is no such thing as safe underage drinking. Parents need to be parents and allowing alcohol within the home sends out mixed messages. It promotes the idea that it is alright to break the law and the idea that underage drinking is acceptable. If children are drinking at home, even while supervised, it is highly likely that they are also drinking elsewhere. Not only is this dangerous but it may have deadly consequences. In some states parents are liable if minors drink, leave a party, and are involved in a crash that results in injury or death.

If students can’t get alcohol they will switch to other, more dangerous drugs

Research shows that alcohol is often the “gateway drug” to other illicit drug use, so by preventing youth from using alcohol reduces the chance of them trying other drugs. When the 21 law was enacted, there was no obvious spike in any other drug use.