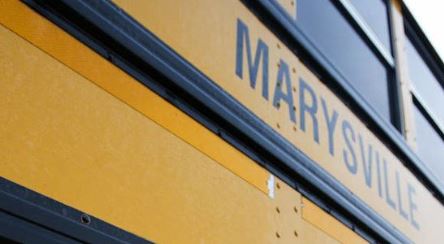 Ever since the first school buses rolled onto America’s streets in 1914, school administrators and bus drivers have been trying to figure out how to keep their students safe. The buses are wide, slow, and make frequent stops, which gives other cars on the road a strong incentive to try to pass them. However, there’s a reason why it’s illegal to pass a bus while its stop sign is out: kids are likely to be crossing in front of the bus, where a passing driver may not see them until it’s too late.

Each year, too many drivers take that chance, and too many children pay the price for their mistakes. Even though passing a bus comes with a steep fine under Washington state law, police are doling out too few of those $419 tickets. The problem: it’s just not possible to keep a police officer on hand to monitor drivers near every bus in a school district simultaneously.

(Image: A camera on the side of a Marysville school bus. Image Source: HeraldNet)

Technology steps in where police can’t keep up

The Marysville, Washington school district came up with an innovative new solution for catching illegal passers in the act. When the bus’s stop sign paddle is deployed, a video camera mounted on the outside of the bus detects cars passing by. That data is sent to law enforcement for confirmation. If police verify that the move was illegal, they collect the car’s license plate number from a video and send a fine or a citation for reckless driving through the mail.

After a month of testing, police have declared the new safety initiative ready to go for 15 Marysville School District buses. The cameras are provided by American Traffic Solutions, an Arizona-based company that designed the CrossingGuard system. American Traffic Solutions collects a fee based on every possible violation it submits, and the Marysville Municipal Court will also charge the district a small fee for processing infractions. The rest of the money collected from fines will go to safety projects such as intersection improvements, improved walking paths, and crossing guards in the local school district.

Marysville is leading the way in Snohomish County, but they’re not the first Washington State school district to sign up for the program; the Highline, Bethel and Mercer Island districts already have cameras installed. For the first 30 days of the program, police plan on sending warnings, not citations; they’re hoping that the knowledge that cameras are there will deter illegal behavior.

This isn’t the first time that technology has been deployed to reduce bad behavior on the road. By now, most Americans are familiar with red light cameras, which monitor intersections and capture the license plate numbers of cars that travel illegally through red lights. In Seattle, traffic engineers are also using “smart grid” technology to monitor traffic volume and change the timing of lights as needed to reduce congestion.