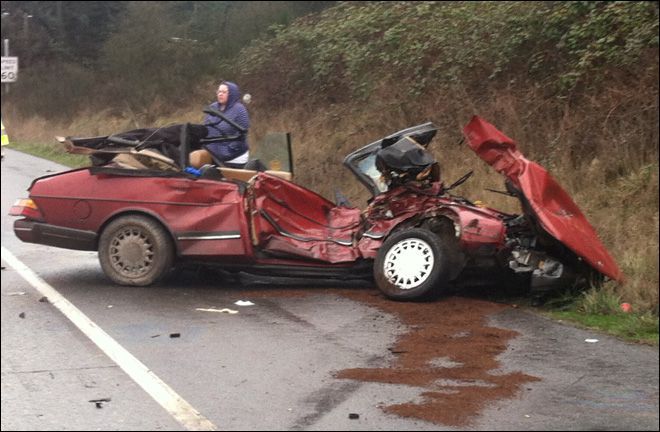 The driver of a red Saab convertible is hospitalized with what are reportedly life-threatening injuries after being involved in a motor vehicle collision with a semi-truck on Interstate 5 near Federal Way.

According to the Washington State Patrol (WSP), the man in his 40s was driving southbound on I-5 near 375th Street in Federal Way at about 10:30 Thursday morning when he cut in front of a semi truck. Troopers received witness reports suggesting that the driver of the vehicle had been exhibiting dangerous driving behavior by weaving through lanes erratically.

At some point, witnesses say the man appeared to lose control of his vehicle and began swerving. He apparently crossed into the right lane in front of a semi truck, causing the truck to crash into him.

As you can tell from the image above, the crash caused severe damage to the Saab. The driver was taken to a nearby hospital with life-threatening injuries, according to statements from the WSP.

This particular trucking accident serves as a perfect example of just how dangerous the roadways can be if you are not practicing safe driving habits. The excessive weight of semi trucks makes accidents even more violent and destructive and a driver in an average vehicle does not stand a chance. The risk of injury and death is extremely high in semi truck accidents.

Since multiple witnesses reported seeing the driver exhibiting dangerous driving behavior, it would appear that he would clearly be at fault for causing the accident. Assuming his insurance policy includes Personal Injury Protection (PIP), his medical bills will likely be covered to the extent of the policy limit.

The roads were wet at the time of the accident, which means the swerving back-and-forth between lanes on such a busy interstate was even more dangerous. Unsafe driving practices put everyone on the roadways at risk of injury or death, which clearly was the result here. Hopefully this man is able to make a full recovery from his injuries.