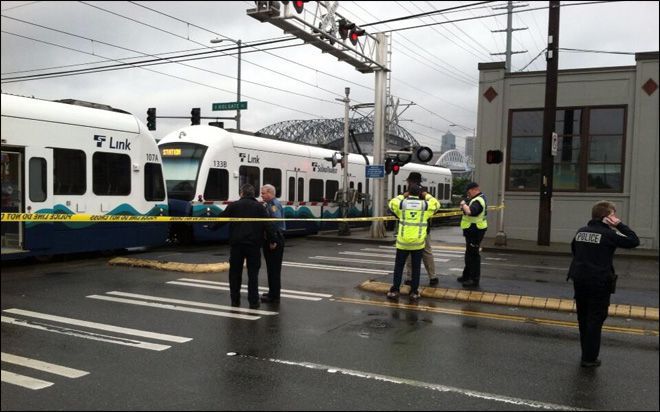 A man suffered life-threatening injuries after he was hit by a light rail train in the SoDo neighborhood of downtown Seattle Tuesday morning, according to police and news reports.

Police and emergency first-responders arrived at the scene at 5th Avenue and South Holgate Street at about 7:15 a.m. Tuesday after receiving reports of a pedestrian being struck by a train in the area.

Reports indicate that the man, who is believed to be in his 50s, suffered significant physical trauma from the impact of the train accident and was immediately transported to Harborview Medical Center in Seattle to be treated for his injuries. Officials say he is currently listed in critical condition.

One witness had just gotten off of the bus during his morning commute when he saw the male pedestrian lying on the ground and a Seattle police officer was assisting him. Officials with the Seattle Fire Department say the man suffered severe chest injuries that were considered life-threatening.

A representative for Sound Transit said that the train itself and warning signals at the crossing were working properly at the time. The person operating the Sound Transit light rail train was tested for drugs and alcohol – which is the company’s standard procedure in the event of an accident – and police say the driver showed no signs of being impaired.

The most glaringly obvious difference between the functionality of light rail trains and standard motor vehicles is that trains are on a track and are therefore only capable of moving in a predictable manner on the tracks. Moreover, pedestrian areas of train tracks are typically well-marked and feature warning signals in order to warn pedestrians of oncoming trains – and Sound Transit has announced that these signals were in working condition at the time of the accident.

Personal injury claims involving train accidents are typically warranted when either the train itself is defective or if a person responsible for operating the train has made some sort of error. If the vehicle was in working condition and the warning crossing signals were properly functional at the time of the accident, then it is unclear if there is any other way that the company could potentially be at-fault for the accident.

In instances where liability and fault are not necessarily clear, it is in the accident victim’s best interest to consult with a personal injury attorney who is familiar with handling train accident cases. Attorneys who offer a free case review or legal consultation will look at your case at no charge to you and determine if you could benefit financially from hiring a lawyer to represent you.