Everett Man Run Over And Dragged By Truck Driver 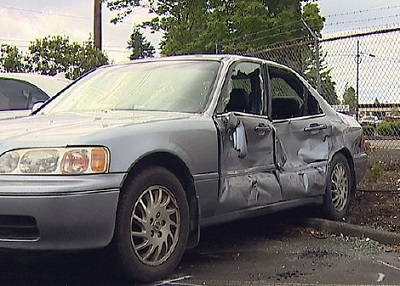 A man was struck and dragged by a pickup truck after he got into an altercation with the driver in Everett on Sunday.

The incident began early on Sunday morning, when the Everett resident noticed that the driver of the pickup truck was dumping trash into a planting strip near an apartment building. He confronted the driver, telling him that it was illegal to dump personal property in that area.

The pickup driver turned violent, chasing the concerned resident—who is in his 60s—around the parking lot, brandishing a pipe. He then got back in his truck and accelerated, striking the victim, running over him, dragging him through the street, and slamming into a parked car. The resident was eventually dislodged from the vehicle and the pickup truck sped off.

The victim was found by emergency responders with a fractured leg and severe damage to his foot. He was taken to a hospital for treatment and has undergone three surgeries for his injuries from the car accident. Police are still searching for the driver of the pickup truck, who was a stranger to the victim.

A Victim's Rights After A Criminal Assault

After an assault and hit-and-run, police will be looking for the driver in order to charge him with criminal behavior. For an injured victim, seeking restitution after an accident may be about more than punishment; they may have significant expenses such as medical bills, lost income from time off work, loss of future earnings, and other damages.

Crime victims in Washington State can have some of their expenses paid by the Washington State Crime Victims Compensation Fund. This program sets a pool of money aside each year for helping the victims of violent crimes pay for the expenses associated with their care. Victims can get help with medical bills, the loss of a loved one’s financial support, funeral expenses, grief counseling, the cost of a sexual-assault examination, and other losses.

In many cases, car, business, or homeowner’s insurance will not cover damages caused by “intentional acts.” However, this does not mean that crime victims have no ability to recover damages from an at-fault person’s insurance company. A driver who injures or kills someone while driving drunk or high, or who flees the scene of the collision, has committed a crime, but their insurance should still pay damages to the injured victim. In some cases, a business that fails to protect a victim from being injured on their property may also be liable.

The issue of whether or not a vehicular assault or homicide was “intentional” is often fought out in court. In cases involving road rage, the at-fault driver’s insurance company may try to claim that they do not have to pay damages because the insured person committed an intentional act; however, the insured person may be arguing in their criminal case that they only wanted to scare or “shake up” their victim and that they didn’t intend to seriously hurt them.

If you have been injured in a crash involving road rage, it may be time to speak with a personal injury attorney. Recovering damages in these cases may be difficult, since the at-fault driver’s insurance company is likely to argue that they have no responsibility to pay an injured victim’s expenses. An experienced lawyer will be able to assist injured victims in determining whether or not the insurance company should pay for their medical bills, pain and suffering, and other damages.