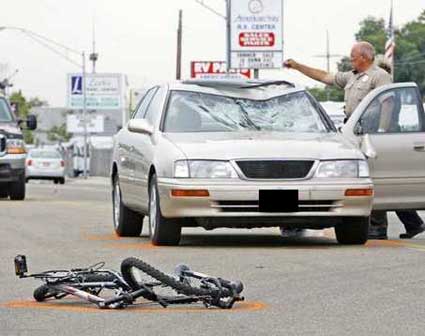 Officials with the Washington State Patrol (WSP) believe that a woman who struck two bicyclists with her vehicle near Maple Falls Saturday evening was under the influence of prescription drugs at the time of the crash. One of the bicyclists was injured and the other was killed, according to the WSP.

Police received a call of a serious collision near Highway 547 and Cimarron Way in Maple Falls just before 8:15 p.m. Saturday. At the scene, they found two bicyclists in the road that had recently been struck by a vehicle. One of the bicyclists, 36-year-old Steven Waterman, was pronounced dead at the scene and the other, a 51-year-old man from Maple Falls, was seriously injured and taken to a nearby hospital in Bellingham.

One woman and her husband live in a home near the site of the bicycle accident and heard the crash. The man, an active-duty soldier in the Army, rushed to the scene to help the injured bicyclists. Though he could not help Waterman, he stayed at the scene and helped emergency crews assist the other bicyclist.

A police investigation found that the driver, identified as 57-year-old Debra Peterson from Maple Falls, was driving a 1994 Ford Escort northbound on Highway 547 when she struck the bicyclists who were riding in the roadway. According to the Bellingham Herald, Highway 547 is a narrow, two-lane road with no designated bike lane. Troopers say that neither man was wearing a helmet at the time of the collision.

Peterson allegedly drove off from the bicycle accident, according to police. In Washington state, it is a felony to leave the scene of an accident that causes injury or death to any of the parties involved. State troopers say that although Peterson reportedly stopped to check on the bicyclists at first, she apparently had a change of heart and decided to flee.  She was eventually located and arrested on investigation of felony hit-and-run.

According to the WSP’s investigation after the crash, Peterson admitted to using prescription medication. Troopers will now be working to determine if the medication caused the woman to be impaired and if that was a contributing factor to the bicycle collision.