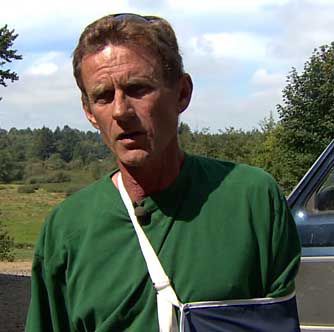 A man working on a parking lot in Redmond was hit by a vehicle driven by an 86-year-old man who fled the scene of the pedestrian accident Saturday morning.

According to news reports, asphalt worker Bob O’Brion was working on a parking lot in the Redmond area when an elderly man approached the crew in his vehicle. O’Brion says he was attempting to show the man how to exit the lot when the man got upset and struck him with the vehicle.

“He took my legs out,” O’Brion says. “My shoulder, head and neck hit the windshield. I slid off the front of the car and he accelerated again, trying to run me over. I swear, I was in fear for my life.”

Several witnesses saw the elderly man then drive away from the scene. Thankfully, bystanders were able to take down the elderly man’s license plate and police eventually stopped him near his Bellevue home. The police did not arrest the man, however, which understandably upset O’Brion.

“We could have booked him but, like I said, he was cooperative, he’s local, he’s not a flight risk,” says Lt. Charlie Gorman of the Redmond Police Department.

Upon being questioned by the police, the man admitted to hitting O’Brion and claimed he drove away from the scene because he was afraid O’Brion would come after him.

Davis Law Group helps victims of personal injury recover financial compensation for their injuries and lost wages. We work closely with the criminal prosecutor to make sure that all avenues, both criminal and civil, are being pursued.

If you have been the victim of a semi truck accident and would like to discuss your case with some of Seattle’s best accident attorneys, contact Davis Law Group at 206-727-4000.