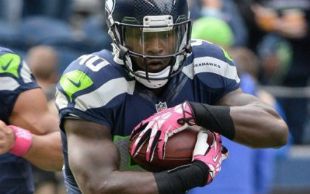 According to news reports, at around 6pm Coleman’s Dodge pickup struck a Honda Civic on the 13600 block of Southeast 36th street. The driver of the Civic was injured — some reports indicate that he may have a broken collarbone, but a source close to Coleman indicated that the driver suffered a broken leg.

Coleman, who was uninjured, walked away from the car accident. According to a source close to Coleman, he was disoriented and didn’t realize that he had hit another vehicle. Coleman is deaf and requires hearing aids in both ears. Apparently one or both of the hearing aids fell out as a result of the impact. Coleman thought he was walking away looking for help. Bystanders and police tried to communicate with Coleman but did not initially realize that he could not hear them.

Coleman was arrested by Bellevue police for vehicular assault and hit-and-run. He was later moved to the King County Correctional Facility. He is being held in jail without bail until a bail hearing later today.

Field sobriety tests performed on Coleman showed no indication of intoxication. However, a blood draw was taken that night in order to test his blood alcohol levels. Test results are not yet available.

What Really Happened In The Seahawks Car Accident?

The pressing question is, what was the cause of Coleman’s car crash? Did he fall asleep at the wheel? Was he distracted by a cell phone? Was he suffering from a concussion suffered during practice? At this point in time, these questions cannot be adequately answered.

A source close to Coleman says that the Seahawk may have fallen asleep at the wheel. Apparently Derrick was very tired and repeatedly dozed off during yesterday’s team meeting. He had to stand up leaning on a doorway in order to stay awake. He drove another teammate home after the meeting and prior to the accident.

Should Derrick Coleman have been allowed to drive? If Coleman suffered a serious hit during practice and was not adequately checked out by Seahawks team physicals, then it is possible that he may have passed out while driving. Again, no information is available at this time.

In a post via Twitter the Bellevue Police Department said, “We will be holding a press conference today at city hall at 2 p.m. to discuss the arrest of Derrick Coleman. No info before then.”