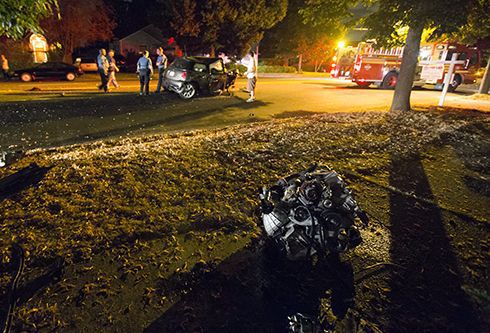 A hit-and-run accident in West Seattle Thursday evening left one man seriously injured, according to reports from the West Seattle Blog (WSB).

According to the WSB, witnesses said a man driving a Mini Cooper was hit head-on by a black Jeep Liberty SUV near 35th Ave SW and Dawson Street. As you can see from the image above, the Mini Cooper was completely destroyed in the crash. The engine was even ejected from the vehicle and landed on a nearby sidewalk.

Thankfully, the WSB reports that witnesses saw the man walk out of the vehicle under his own power. The man was eventually placed on a stretcher and taken via emergency crews to a nearby hospital. There was no report of injuries, but witnesses said he did not appear to be seriously injured.

This man is lucky that his vehicle was able to protect him from such a violent collision in West Seattle Thursday. We also hope that police are able to apprehend the hit-and-run collision suspect. If you have any information regarding this accident, please contact the Seattle Police Department.

Davis Law Group helps injured victims of car accidents recover financial compensation for their injuries and lost wages. We work closely with the criminal prosecutor to make sure that all avenues, both criminal and civil, are being pursued.

If you have been the victim of an accident and would like to discuss your case with some of Seattle’s top personal injury attorneys, contact Davis Law Group at 206-727-4000.