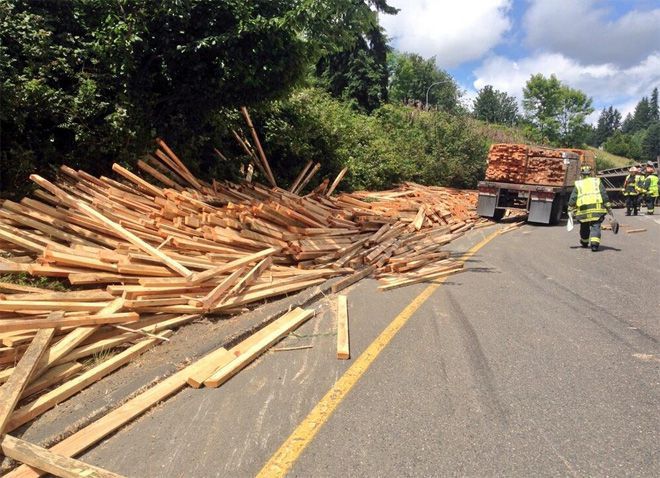 Officials with the Washington State Patrol (WSP) and Washington State Department of Transportation (WSDOT) say an overturned logging truck spilled several pallets of lumber across the roadway on US-101 near Olympia on Monday afternoon.

According to news reports, a semi truck was carrying a large load of pallets containing lumber on Highway 101 at the Interstate 5 junction near Olympia when the driver lost control of the vehicle. This eventually caused the logging truck to overturn and spill the wood debris across the highway.

WSP Trooper Guy Gill says the driver was going too fast at the time that he lost control, and that investigators believed that was the sole contributing factor for the accident. Gill added that the driver didn’t show any signs of being under the influence of alcohol or drugs, and no injuries were reported in the incident.

Luckily, the fallout from this particular truck accident was limited to traffic delays as crews cleaned up the debris from the highway. And although dealing with these types of messes often requires a significant amount of resources from the state, it’s fortunate that no one was hurt as a result of this incident.

Sadly, a similar collision occurred in Arkansas on Monday, June 2. Officials there reported that several logs flew from the bed of an out-of-control logging truck near a construction zone on a highway, killing two of the construction workers and injured 19 more.

According to a preliminary investigative report regarding the collision, a 1999 Peterbilt tractor trailer traveling on Highway 65 near Clinton, Ark. suffered a blown rear tire that caused the driver to lose control of the truck. The logging truck flipped onto its side, which sent several massive logs rolling out of the trailer and onto the highway.

Two construction crew workers – identified as 51-year-old Robert Keith Moore and 40-year-old Ricardo Trochez – were killed in the incident, while at least 19 more suffered significant injuries as a result.

“They were like sitting ducks on the bridge,” Van Buren County Sheriff Scott Bradley said to the Associated Press. “There was nowhere for them to run to get away from the logs.”

As is the case for private citizens, commercial vehicles in Washington state – and across most of the United States – are required to carry liability insurance should they be involved in a collision or other incident that results in the tragic injury or death of another person.

If a person is involved in a collision with a logging truck or other type of commercial vehicle, it is imperative that they collect all pertinent information about the logging company, the driver involved in the collision, and the insurance policy that covers the vehicle involved.

Because these claims are often complex and difficult to pursue, it may be in a victim’s best interests to consult with a logging truck accident attorney who has experience in handling cases involving logging trucks and other types of commercial vehicles.