Shoreline School Bus Accident: Was Brake Failure or Driver Error The Cause? 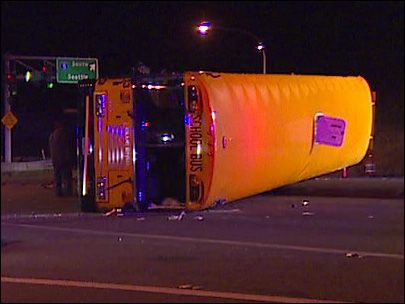 UPDATE: The injured victims in the King's High School bus crash that occurred in Mountlake Terrace Saturday night were released from the hospital with only minor injuries, according to the Washington State Patrol (WSP).

Investigators have released 911 tapes related to the incident, the contents of which suggest that the bus was traveling at extremely high speeds when it attempted to negotiate a right-hand turn while exiting the I-5 offramp:

"Was it at freeway speed?" a dispatcher asked.

"Oh yeah," the caller answered. "He just came flying right off the freeway."

10 of the 16 passengers on board the bus at the time of the collision suffered injuries including a concussion, broken arm, minor cuts, and bruises. All injured parties were reportedly released from the hospital the same night.

The bus driver reportedly told investigators that the bus brakes had failed, but WSP officials say that their investigation found the brakes to be functioning normally. Troopers are looking for anyone who may have witnessed the crash and ask that they call (425) 508-0602 with any possible information.

ORIGINAL STORY: On February 14, 2015, at least nine people were injured when a school bus operated by the Shoreline School District’s Transportation Department rolled over while returning from a high school basketball away game.

Janelle Retka reports the bus crashed after it had departed Mount Vernon High School after a district championship game to return students to King's High School in Shoreline.

The bus rolled over on westbound SR-104 off the southbound I-5 ramp near Mountlake Terrace. Washington State Patrol officials are investigating what caused the crash. One of the factors may be brake failure.

The Davis Law Group has experience with bus accidents and recently handled a fatal collision in which the driver claimed brake failure. Investigators must review both the bus's maintenance and the driver's performance in the initial hours after a crash before evidence gets lost, confused, or muddled.

Investigators will need to pay particular attention to the report that the driver pulled the bus over to the side of Interstate 5 shortly before the crash occurred because the bus muffler was dragging on the ground. Washington State Patrol officials say the driver secured the muffler and then continued driving to the school campus.

The Transportation Research Board recognized that improved driving training was necessary to improve safely in a 2009 report Special Safety Concerns for the School Bus Industry. Specifically the report identified a need for more behind-the-wheel training and defensive driving skills training. The report also indicated that far less than half of bus drivers perform the mandatory pre-trip vehicle inspections/safety checks—because most supervisors don’t properly train and/or monitor drivers to ensure that they complete the inspections.