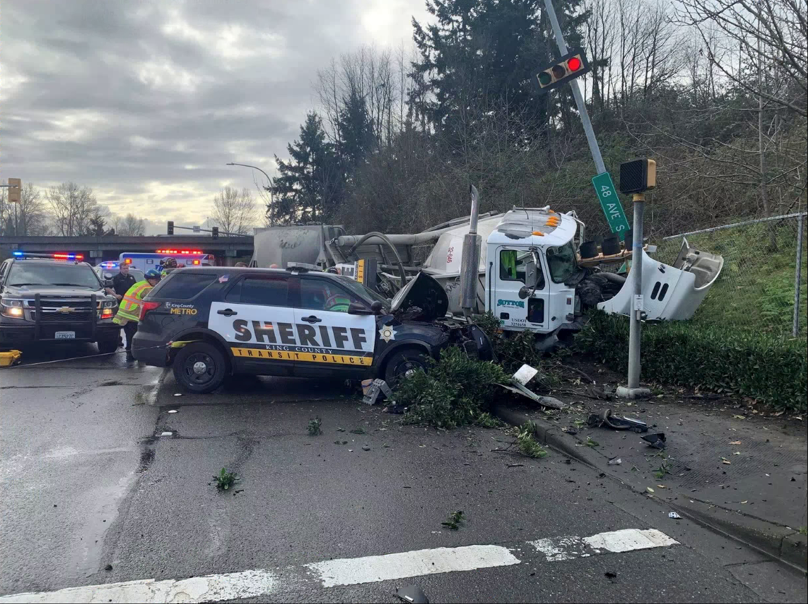 A King County Sheriff’s Deputy was injured after being struck head-on by a cement truck in a possible impaired driving accident near Tukwila Thursday morning.

Police and medics responded to reports of a head-on crash near the intersection of Interurban Avenue South and 48th Avenue South, near the I-5 exit ramp. Investigators say the truck exited I-5 too quickly, causing the driver to lose control on the offramp before the truck crossed the centerline and struck the deputy’s cruiser head-on.

The impact of the crash caused the deputy’s vehicle to strike a traffic light, leading to the closure of the roadway. The deputy was also trapped inside of his vehicle as a result of the crash and had to be extricated.

Reports indicate that the deputy suffered a broken leg in the trucking crash, though he was alert and in good spirits despite his injury. Police also arrested the truck driver for investigation of vehicular assault, as officers determined a likelihood that the driver was under the influence of drugs or alcohol at the time.

Determining liability for an accident is typically one of the more complicated aspects of pursuing a personal injury claim against an at-fault driver. In situations where the other driver was arrested at the scene and found to have crossed over the centerline before striking a vehicle head-on, liability may not be such a difficult battle after all.

But in situations where the accident occurs while the injured victim was in the course of their employment, things can get complicated. For example, the Department of Labor & Industries will come into play as L&I claims are typically part of the process for an on-the-job injury. The deputy would also likely be eligible for benefits under the Crime Victims Compensation Program due to the fact that the at-fault driver will likely face criminal charges.

But since the main cause of the deputy’s injury was negligence by a third party, the deputy would have a legal right to also pursue a personal injury claim against the truck driver’s insurance company. Identifying which damages would be covered by L&I versus the third-party insurer is a much more complicated discussion and would likely warrant the assistance of a personal injury attorney.

Davis Law Group offers free legal consultations for accident victims to help them better understand their legal rights and options after a serious car accident. Call our office at (206) 727-4000 or use the confidential contact form on this page to request a complimentary case review with our team today.