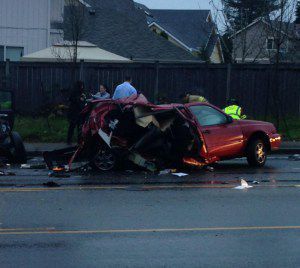 Officials at Harborview Medical Center in Seattle have announced that 16-year-old Teagan McGinnis, the Kentridge High School student who was involved in a serious motor vehicle collision earlier this week, has died from the injuries he sustained in the crash.

McGinnis was driving his vehicle to school when a 49-year-old woman attempted to make a left turn and crashed into the teen student’s car. The collision caused McGinnis to lose control of his vehicle and he eventually crossed into another intersection where he was struck by a third car, which was being driven by an unidentified 58-year-old woman.

Kent police and other officials responded to the scene and performed CPR on McGinnis before he was taken to Harborview Medical Center in Seattle. According to several news reports, a Renton police detective was in the vicinity and witnessed the crash. He reportedly ran to the scene and attempted to administer emergency car to the teen while first responders were en-route to the scene.

The Kent Reporter originally reported that McGinnis had died at the scene of the crash, but his family corrected those reports shortly after and stated that he was placed on life support at Harborview. According to a Harborview spokesperson, McGinnis was pronounced dead at approximately 6:45 p.m. Tuesday.

After the tragic death of the teenager involved in this devastating crash, authorities will likely spend the coming weeks – and perhaps even months – conducting a full investigation into the circumstances that led to the collision. This investigation will serve a variety of purposes, the first being to determine if anyone involved in the crash should face any criminal charges.

Additionally, the results of a police investigation will help to determine who may be at-fault for causing the accident. This is important information because determining fault in a car accident can be a significant factor in any potential civil action that victims or their personal representatives may wish to bring, such as a personal injury or wrongful death claim.

Because a police officer happened to witness this particular fatal car accident, there is a chance that the officer’s patrol vehicle may have caught the accident on video. Many police vehicles are equipped with dashboard surveillance cameras for the purpose of capturing video evidence of crimes and incidents such as this one.

If the police officer’s dashboard camera did happen to catch the accident on video, that evidence could be used to establish whether or not any one driver is at fault for causing the crash that killed McGinnis. If one of the other drivers involved in the collision is found to be at fault, McGinnis’s family could potentially bring a wrongful death claim against that driver’s insurance company.