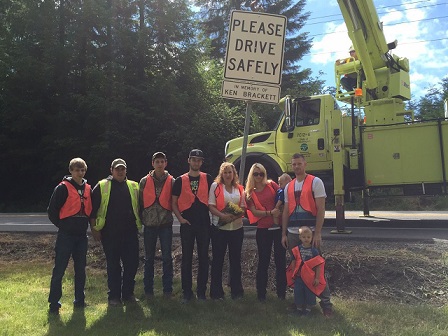 The Washington State Department of Transportation (WSDOT) recently finished erecting a memorial sign on the side of State Route 507 near Yelm in memory of Kenneth Brackett, who was tragically killed after being hit head-on by a wrong-way driver back in December.

Mr. Brackett was driving southbound on SR 507 on the morning of December 11, 2014, just a few miles south of Yelm, when an out-of-control vehicle crossed into the oncoming lanes and struck Brackett head-on.

According to news reports about the tragic car accident, witnesses saw 40-year-old Corey Tribble driving northbound on the same highway passing multiple vehicles at a time in a no-passing zone at very high speeds right before the crash occurred. Tribble, however, told detectives that he was in a legal passing zone and swerved because of an object in the roadway.

However, court documents related to the crash contain statements from several witnesses who all contended Tribble was passing illegally. The witnesses also added that he tried to pass approximately eight vehicles at one time and seemed to be showing signs of road rage.

Emergency crews airlifted Brackett to Harborview Medical Center in Seattle for treatment of his injuries and he had to undergo several emergency surgical procedures, including a partial amputation of his left arm and repairing a compound fracture to his left femur. Brackett’s family was told he faced a long road of surgeries and that the overall odds of a recovery were grim.

After more than two weeks of round-the-clock care and monitoring at Harborview, Mr. Brackett was pronounced dead from his injuries on December 26th, 2014. Mr. Brackett is greatly loved and missed by friends and family members, and is survived by his loving wife, Dayna, and three children – two sons, aged 18 and 20, and a 26-year-old daughter.

The Washington State Patrol initially arrested Tribble on suspicion of vehicular assault for his role in causing the collision, but Brackett’s death meant that those charges could potentially be upgraded to include vehicular homicide.

WSDOT typically waits until the criminal components of a case have been resolved before putting up a memorial sign. The family says a WSDOT official told them that this would not be an issue since the case was clearly in the victim’s favor. Mr. Brackett’s family hired the attorneys at Davis Law Group to hold the at-fault driver accountable for his recklessness and negligence in causing the fatal crash. The case is ongoing.