Jury Awards $1 Million to Family of Toddler with Surgical Souvenir 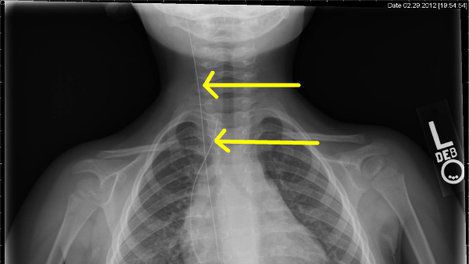 A King County jury on December 19 awarded a $1 million verdict against a Swedish Hospital doctor after they found he was responsible for leaving a surgical wire inside of a toddler during treatment for dehydration in August of 2011.

Court records show that the toddler’s parents filed a medical malpractice lawsuit against Dr. Michael C. Shannon claiming that a surgical wire was left inside of their toddler son, Jaxon Swain-Schons, after he received treatment for dehydration. Shortly after the procedure took place, Schons allegedly began experiencing sharp pains in his neck which eventually caused a cyst to protrude from his neck. This came about from a catheter being inserted into a vein in the boy’s leg and was not taken out.

X-Rays showed a surgical wire was inside the child’s body; split into two pieces, one traveled up into the boy’s neck and the other in his leg. A King County jury found that the negligence for the procedure is being placed on the doctor who treated the young boy for dehydration in August 2011. With this finding, the jury awarded $1 million in damages to Jaxon and his parents.

According to the medical reports at the Everett Clinic the wire, which plays the role of a guide in this particular procedure, was left inside of the boy’s leg. Months after the procedure, the wire eventually broke into two pieces and started traveling through the child’s body, causing him severe pain.

The boy's parents filed a claim against the hospital and the doctor who performed the procedure. Swedish hospital is known for surgical checklists but this one particular case slide through the cracks and was not double checked resulting in a wire being left in Jaxon’s body.

Swedish sent the following statement to KING 5: "At Swedish, our top priority is the health and well-being of every patient we serve.  We are always evaluating our practices to ensure every patient receives the best care possible. We are unable to provide comment regarding this specific case due to patient privacy concerns and because there is ongoing litigation."

The U.S. Department of Health and Human Services (HHS) has developed a list of medical errors and mistakes that they consider to be completely preventable and, therefore, should never occur in the healthcare setting called “Never Events.” While most of these mistakes are extremely egregious and devastating, they actually occur quite often.

According to a study published in the New England Journal of Medicine (NEJM), approximately 1,500 cases involving surgical souvenirs alone - meaning instances where a doctor has left a surgical instrument or other piece of equipment inside of a person after surgery - occur each and every year in the United States.

Thankfully for this family, Jaxon is unlikely to suffer any long-term complications from the medical mistake made by his doctor. However, thousands of other medical patients across the country aren't as lucky as this boy and it is not uncommon for children to require long-term care as a result of medical malpractice, which can cost millions of dollars to the family and loved ones.