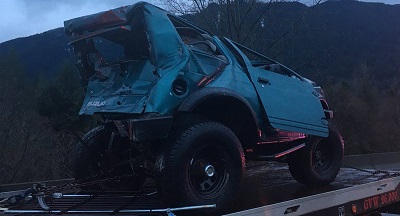 A collision between a Jeep and a semi-truck on Interstate 90 near North Bend left the driver of the Jeep seriously injured, Washington State Patrol reports. The crash occurred around 3:30 p.m. near exit 31.

Eastbound I-90 was shut down for about two hours Wednesday afternoon. Images from the scene show a semi-truck hauling a load of cars on a trailer and a severely damaged blue Jeep (pictured).

State Patrol said the driver of the Jeep was transported to Harborview Medical Center in Seattle. He is likely to survive, police said.

The cause of the crash is not yet known.

What To Do After A Semi-Truck Crash

The first thing injured victims should do is seek medical treatment for their injuries. Crashes such as the one above are often complex, and the full investigation to determine liability may take some time to complete. If you or a loved one has high medical bills and are not sure where to turn next, it may be time to consult with an experienced trucking accident lawyer.

READ: How Do I Determine If I Need A Semi-Truck Accident Lawyer?

In semi-truck crashes, multiple plaintiffs may be involved. Because of that, it may be difficult to figure out who will pay for which expenses. That’s where your lawyer can help.

A semi-truck lawyer can:

One thing to remember in semi-truck accident cases: the trucking company and its insurance provider has already begun investigating the collision. They act quickly to eliminate or minimize their responsibility for the accident. They will often use shady or unethical tactics to take the blame off themselves. For that reason, waiting to consult with a lawyer can only hurt a victim's chances of a successful outcome.

At Davis Law Group, P.S., we understand how confusing and intimidating it can be to deal with the aftermath of a semi-truck accident. Here are some additional resources from Davis Law Group that explain some of the intricacies of these accidents: