JBLM Soldier Killed in Pileup Crash in Lakewood, 10 Others Injured 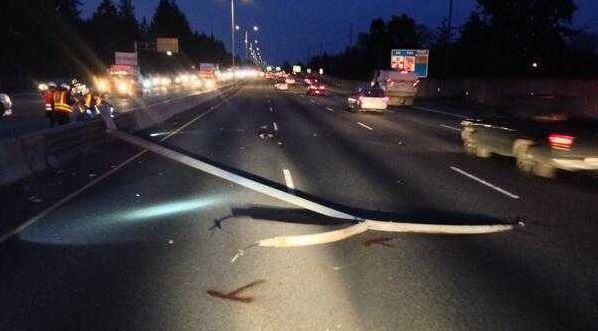 One soldier was killed and ten other people were significantly injured in a devastating multi-vehicle crash in the Tacoma suburb of Lakewood on Thursday night.

According to news reports, a military shuttle was transporting re-deployed soldiers from the 7th Infantry Division who had just returned from Afghanistan. The shuttle was driving from SeaTac Airport to Joint Base Lewis-McChord when the driver of their van lost control and crashed into the median. The crash reportedly knocked over a light pole into the opposite lane of traffic, which caused a traffic backup of approximately seven miles on I-5.

Washington State Patrol (WSP) troopers say the crash involved 10 military service members – who were all on board the military shuttle – and one civilian driver in another vehicle.

Officials have not yet released the name of the 28-year-old soldier who died from the injuries he suffered in the fatal accident after being transported to a nearby hospital. News reports indicated that 10 other people involved in the pileup crash were injured, but four of them were examined and released from the scene.

One of the soldiers reportedly suffered serious injuries in the crash, but WSP Trooper Guy Gill said the man was in stable condition at an area hospital as of 8 p.m.

"That's one of the things that kind of hits all of us right in the heart when you think about it this. I mean, those individuals serve our country and they work hard for us," Trooper Guy Gill said. "That pulls at all of our heart strings, because we know how hard they work for us, and to lose a life like this just doesn't seem right."

The military shuttle was headed southbound in the HOV lane when it crashed into the median and into northbound oncoming traffic. The light pole fell onto the van and was difficult to extract because freeway light poles are attached to the center barrier all the while it was rush hour.

WSP officials did release a statement explaining there were a total of 11 soldiers injured, as well as the driver of the other vehicle. It is under investigation as to why the driver lost control and crashed into the center barrier of the freeway, but police did say the driver interviewed by a drug recognition expert and was not found to be impaired in any way.

Legal Questions to be Considered after Fatal Crash

All car accidents can be scary and many leave the people involved with serious and complex injuries that require a great deal of medical treatment in order for the victim to recover. However, from a legal standpoint, there are a number of questions that need to be answered in order to determine the legal options for those involved in the crash.

Some of those questions include:

Because the damages involved in this crash are so high and so many people have been affected as a result, it will be incredibly important for investigators and the injury victims involved to collectively determine the answers to these types of questions in order to understand their legal options moving forward.

As Trooper Gill said, it is incredibly devastating whenever anyone is killed in an accident – but it truly pulls on our heart strings to hear that a military service member was killed as a result of a crash. Our sincere condolences go out to the loved ones of the victim and the rest of those involved in this unfortunate incident.

Contact a wrongful death attorney if you have questions.