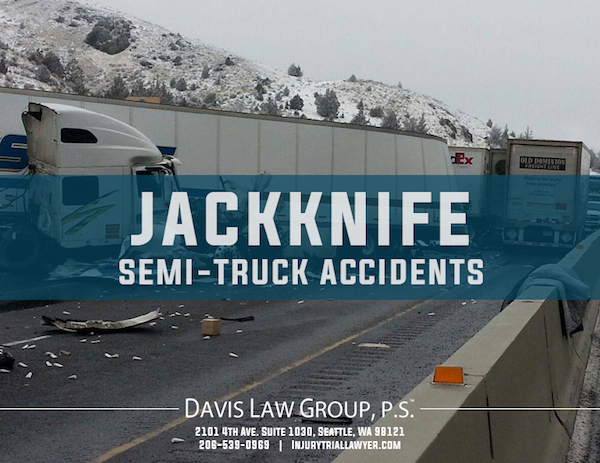 Jackknifing can refer to a situation in which a semi-truck or tractor-trailer skids, and the trailer swings out from behind and to the side, forming an “L” or “V” shape. When the trailer skids to one side, it’s known as a trailer swing or trailer slew. The result mirrors that of a folding pocketknife.

Jackknife accidents are highly dangerous. They often cause significant damage to property and wreak havoc on roadways, as seen in the accident above. It’s not uncommon for roads to be shut down for hours, if not longer. A jackknife wreck can involve multiple vehicles and take up two or more lanes of traffic.

Most importantly, jackknife accidents can be devastating to the people involved. It can be fatal to the trucker, as the top of the cab can be hit or sliced off as it swings around and tries to fold under the trailer. And as is the case in all semi-truck crashes, other drivers are at extreme risk due to the size advantage the trucks have. When a semi-truck jackknifes, it’s usually unlikely a passenger car can avoid it.

Studies have shown that just over half of all semi-truck fatalities occur on non-divided two-lane roadways. That means an oncoming car may hit the swinging trailer head on.

Jackknife semi-truck accidents happen for many of the same reasons all types of commercial truck crashes do. The following are some of the most common:

Semi-truck accidents are often severe and in many cases deadly, making it one of the most serious type of semi truck crash. Traffic safety experts estimate that about 5,000 people are killed in semi-truck accidents each year. In Washington State, there were 3,940 large truck involved crashes in 2016, 32 of which were fatal. An additional 61 of those crashes resulted in a suspected serious injury.

A report by the National Center for Statistics and Analysis states that nearly 10 percent of all semi-truck fatalities are a result of a jackknife accident. Those who are not killed in these accidents likely face one of the following injuries:

How Truckers Can Avoid Jackknife Accidents

No matter the experience level of a trucker, they can never be too careful when behind the wheel of an 18-wheeler. It cannot be overstated how dangerous semi-trucks are and how much responsibility the trucker holds. Following all traffic laws is important, first and foremost.

A trucker should also do the following:

It’s obvious how devastating a jackknife accident can be. These accidents occur when the brakes are suddenly engaged. A trucker can limit this risk by applying the brakes, letting off a little, then applying them again. Taking evasive action rather than slamming on the brakes also reduces the risk of jackknifing a semi-truck.

Truckers can’t predict all hazards on the road. Drivers of passenger vehicles share blame in many semi-truck accidents. But practicing safe driving techniques and being attentive on the road is imperative for truckers.

What To Do After A Jackknife Semi-Truck Accident

Semi-truck crashes should not be taken lightly. It’s imperative that you take care of yourself and receive medical treatment first. It’s then recommended that you speak to an experienced trucking accident attorney about your case. Semi-truck accidents are complicated, and the right attorney can make all the difference.

You or your loved one’s injuries may require a lifetime of treatment and therapy. A skilled and experienced trucking accident lawyer can help you get the compensation you deserve. Contact attorney Chris Davis and the trucking accident attorneys at Davis Law Group, P.S., for help. Call (206) 727-4000, use the chat feature below or fill out the contact form on this page for a free case evaluation.