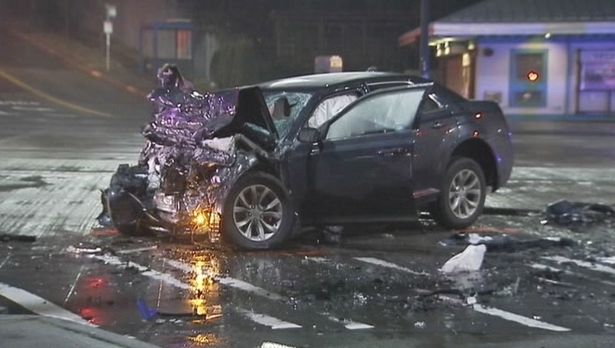 Washington State troopers were led on a high-speed chase on I-5 last night, after they tried to pull over a car for a traffic stop and the driver fled instead. The car reached speeds of over 100 miles an hour before the driver exited the freeway, lost control of his car, and crashed into the side of a Metro bus. The bus was empty except for the driver, who reported being shaken up but not injured.

The suspect was extracted from his totaled car and taken to Harborview Medical Center. He is currently listed in critical condition. Police are still investigating the incident. The suspect was driving a rental car.

What happens after someone crashes a rental car?

This case may be complicated by the fact that the driver is, according to news reports, 18 years old. Many rental car companies do not allow people under a certain age to rent their cars; although any adult aged 18 or over can rent a car if an agency allows them to do so, all states besides New York and Michigan permit car rental agencies to set minimum age requirements. The usual minimum is 25; drivers under that age either can’t rent a car at all, can only rent with additional surcharges, cannot rent large or expensive vehicles, or must show that they’re traveling on official military or government orders.

Since Washington State does not require rental car agencies to rent to anyone, most agencies use an age limit that would prevent an 18-year-old from getting behind the wheel. This means that it’s possible that the suspect in this case could have been driving a car that someone else rented for him, or that he took a car that he wasn’t supposed to be driving. If Metro needs to recover the damages to their bus, or if he had hit someone else’s vehicle during the chase, this could complicate the issue of who will be paying for damages, since if he wasn't the person who rented the car he may not have insurance to cover damages.

If you have been injured in an auto accident involving a rental car, it may be time to consult a personal injury attorney about your case. Because so many different sources of insurance can be involved when someone rents a car, it can be difficult to determine which company is covering the liability of the driver who caused the accident.