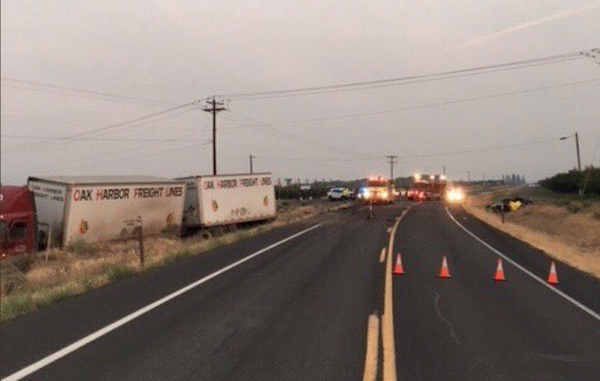 Two people were killed when their vehicle collided head-on with a semi truck early Saturday morning on State Route 243 near Desert Aire, according to the Washington State Patrol.

The incident occurred at 4:36 a.m. about one mile south of Desert Aire.

A 19-year-old Mattawa man was driving a Honda Civic north on SR 243 when he reportedly crossed the center line and collided head-on with a Freightliner semi truck pulling two trailers.

The driver of the Civic and his passenger, a 26-year-old Mattawa man, both died at the scene.

The driver of the semi truck, a 35-year-old Kennewick man, was injured and transported to Kadlec Medical Center in Richland.

The cause of the collision remains under investigation. SR 243 was shut down for about 10 hours.

Who is At-Fault in a Commercial Truck Crash?

There are more parties than you think who might be liable for a truck accident. At Davis Law Group, P.S., we look at the following entities when investigating a truck accident case:

It’s not uncommon to have several defendants in a truck accident case who share fault for the crash. A truck accident lawyer will identify and name each party to increase your chance of receiving the maximum compensation allowed by law for your injuries.

For a free case evaluation with a Washington personal injury lawyer, contact Davis Law Group today. We operate on a contingency fee basis, meaning we don’t get paid unless you win your case.