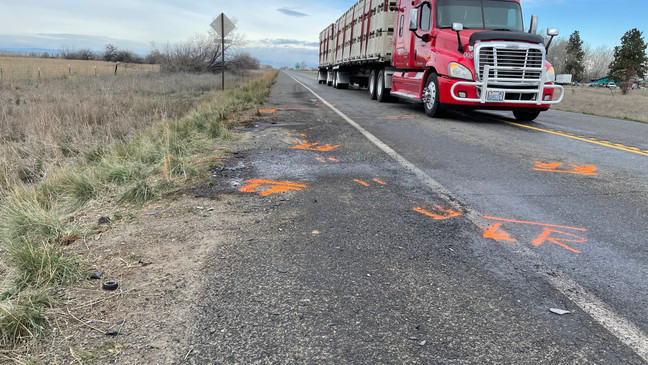 A three-year-old was among the four dead after a head-on collision on SR-22 in Eastern Washington early Wednesday morning.

State troopers responded to the scene near the junction of SR-22 and SR-23 around 3:00 a.m. Wednesday morning.

According to officials, one vehicle with four individuals was westbound on SR-22 when it crossed the center line striking an eastbound vehicle head-on.

Three of the four people in the westbound car as well as the driver of the eastbound car were killed in the crash, including a three-year-old child.

The fourth person in the westbound vehicle, a four-year-old child survived with broken bones and a head injury.

Head-on collisions are some of the most devastating accidents we see on our roads, especially when they come at freeway speeds as this collision appeared to.

Two-lane highways like SR-22 are particularly dangerous to drivers as split-second lapses in judgment or awareness can lead to a major catastrophe like this collision.

Given the early hour of the morning, it is possible that the driver of the westbound vehicle that crossed the center line may have been drowsy at the time of the collision, but that cannot be known for certain until investigators release their final report.

Understanding the Recovery Process After a Multi-Victim Accident

For any who has been a victim in a serious accident like this or has lost a loved one in an accident like this, conducting a thorough investigation to gather all available relevant information is crucial to getting the best result for your claim.

This investigation process can start with a police report which will lay out a general set of facts gathered from the scene of the accident that may include things like witness statements, scene photos, and records of physical evidence such as debris and marks on the roadway.

An investigation completed on behalf of a specific victim after a collision could build upon this police report to either expand upon the details provided or search for new information including expert testimony or other witnesses not recorded on the police report.

After a collision with seemingly one at-fault party and multiple injured parties, options for recovery can be limited due to the per accident limit on the at-fault driver's insurance, meaning accident victims can be forced to fight for what little insurance is available to them, forcing them to fight both the insurance company and each other.

While the first priority of a family grieving after losing a loved one should be to take care of each other and grieve appropriately, when the time comes to evaluate whether or not to pursue a claim, they will need experienced council to navigate the complex recovery process and avoid being taken advantage of.

The experienced team of wrongful death attorneys at Davis Law Group have been helping the loved ones of accident victims put the pieces together after devastating collisions like this one for more than 20-years, all while still understanding no two collisions are the same.

If you've lost a loved one in an accident and have questions about their claim you can call 206-727-4000 or use the chat or contact number on this page to request a free case evaluation from our experienced and compassionate team of attorneys and case evaluators today.