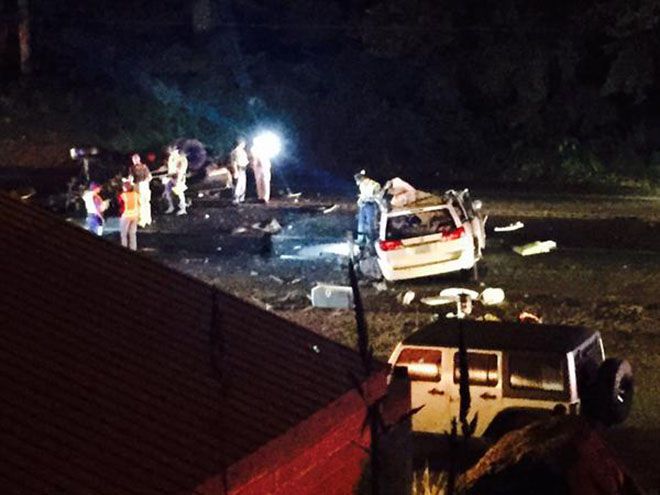 Three people were killed and three more were hospitalized with serious injuries after a head-on car accident on State Route 14 in Skamania County Saturday evening.

According to KOMO, the Washington State Patrol received multiple reports of a collision involving several vehicles on SR-14 near Skamania just after 8 p.m. Saturday. When troopers arrived on the scene, they found two vehicles that appeared to have been involved in a head-on collision.

Investigators believe 24-year-old Heath Martin was driving a 1997 Toyota Tacoma on SR-14 when he crossed the center line of the highway and crashed head-on into a 2005 Toyota Sienna minivan driven by 47-year-old Anatoliy Goy. Both Martin and Goy were pronounced dead at the scene, as was a 7-year-old child passenger in Goy’s vehicle.

The remaining passengers from the minivan, a 49-year-old woman and two other young children, were airlifted to Legacy Emanuel Medical Center in Portland to be treated for serious injuries. One of the children is reportedly in critical condition at the hospital.

What Are The Legal Issues In Head-On Crash?

According to the Washington State Patrol, Martin – the driver who allegedly crossed the centerline and is likely at fault for the crash – did not have a valid Washington state driver’s license and was not wearing a seatbelt at the time of the collision. Goy was reportedly wearing his seatbelt at the time, but sadly it was not enough to save him from the violent impact caused by the crash.

Troopers are still trying to determine if impairment from drugs or alcohol may have played a role in causing the crash, though those details are less important at this point; since Martin was killed in the collision, any criminal charges related to impairment wouldn’t become a factor.

But from a legal standpoint, the fact that Martin was an unlicensed driver could be a big deal for the surviving victims and family members of Goy and the young child who died. Since unlicensed drivers rarely carry an auto insurance policy, the victims would be left to filing claims with their own insurance companies in order to receive coverage.

If the victims had Uninsured/Underinsured Motorist coverage on their insurance policies, they would have much better odds of successfully recovering the compensation for their medical bills and other damages. Of course, answering these questions will likely require extensive investigation by a personal injury attorney with experience in serious collisions.