Groups Call for Driver Safety during Stop on Red Week 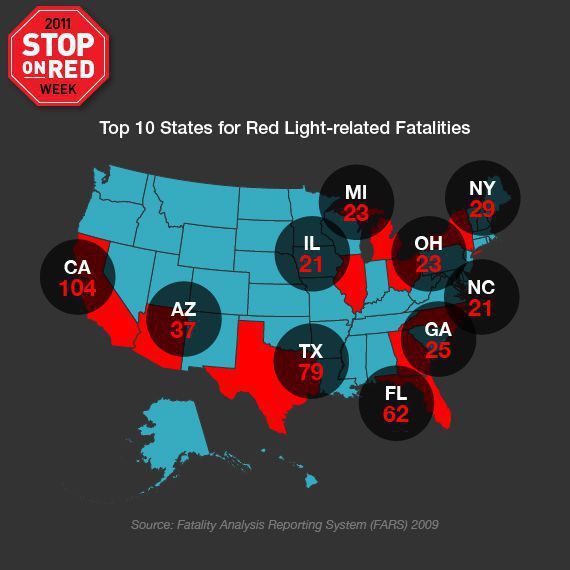 Running a red light can be extremely deadly, and that is the message that the highway safety advocacy groups want the public to walk away with during National Stop on Red Week.

Stop on Red Week takes place during the second week of August each year, that being August 5 through August 11 in 2012. As part of nationwide efforts to spread awareness and deter drivers from this dangerous behavior, the National Campaign to Stop Red Light Running (NCSRLT) will be promoting red light safety throughout the week.

According to the Insurance Institute for Highway Safety (IIHS), drivers running red lights resulted in 676 total deaths and approximately 113,000 injuries. Perhaps more unsettling is the fact that approximately 65 percent of all deaths were people other than the person running the red light – such as drivers of other cars, passengers, bicyclists and pedestrians in crosswalks.

An interesting trend also pointed out by the National Coalition for Safer Roads (NCSR) showed that a majority of red light running takes place on Fridays between 1 and 5 p.m. So, Washington State drivers, please drive carefully and obey all traffic signals as required by law – I promise, they’re there for a reason.

If you were injured in a car accident because of a red light runner, you may be entitled to financial compensation for your injuries, medical bills and lost wages. The Davis Law Group has successfully represented motor vehicle accident victims for nearly 20 years and has negotiated countless settlements for our clients. Call our office today at 206-727-4000 to schedule a free consultation with an attorney.