Group of Children Hit By Truck At School Bus Stop 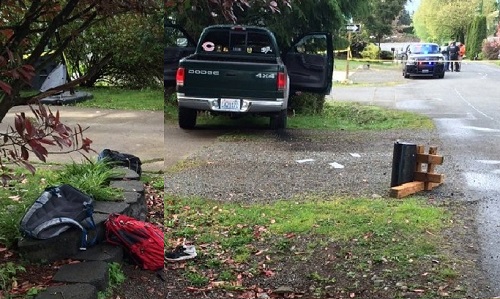 UPDATE: King County sheriff's deputies have announced their plans to arrest the 19-year-old driver of the pickup truck for an investigation of vehicular assault. The driver had a suspended license due to a history of seizures. The most severely injured child has a chest wound, but is conscious and alert at Harborview. The injured children were part of a group of roughly 20 children waiting for the bus.

ORIGINAL STORY: A group of children waiting for their school bus in Maple Valley were struck by a pickup truck this morning. Police believe that the driver of the pickup truck suffered from a medical emergency before losing control of the vehicle.

Two children were transported to Harborview Medical Center, one with life-threatening injuries. Police are reporting that a third child sustained non-life-threatening injuries, a fourth was clipped by the vehicle but uninjured, and a fifth and sixth were injured by flying debris from a mailbox that was struck by the pickup truck.

The children are students at Cedar River Middle School and the crash occurred near SE 270th Street and 218th Avenue SE. The vehicle that struck the children stayed at the scene, and the driver of the pickup truck was treated by emergency responders at the scene. Police are investigating the circumstances of the accident.

Other Types Of Dangers Driving Accidents

Most people are already aware of the dangers of distracted, drunk, and drugged driving. Few realize that medical emergencies can also result in serious, sometimes fatal, mistakes behind the wheel.

Sometimes, medical emergencies happen out of the blue, with no warning that the driver should not get behind the wheel. In other cases, drivers already know their diagnosis but choose to take risks anyway. After certain medical diagnoses, like sleep and seizure disorders, a driver’s license will be suspended. Because conditions like unexpected unconsciousness or seizures could cause catastrophic consequences behind the wheel, people with these conditions are legally barred from driving. In some cases, if their condition improves and they go a certain period of time without experiencing a relapse, their license may be reinstated.

You can learn more about how a potential Sudden Medical Emergency affects car accident claims in this article.

The circumstances of every car accident are different, and investigators may spend days or weeks figuring out what happened. Some questions they may need to answer include: