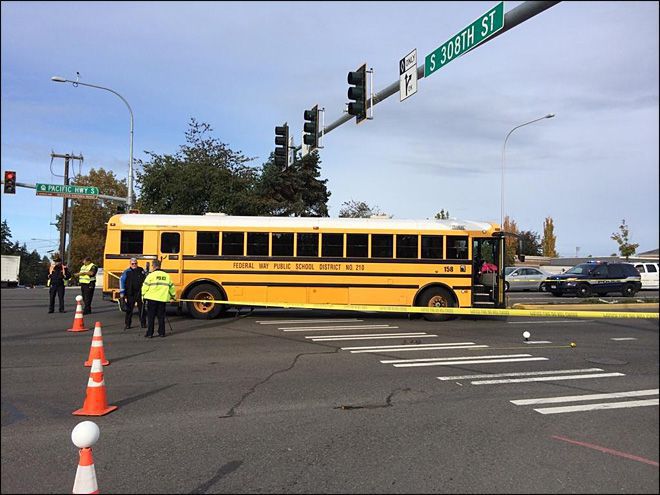 Police say a 15-year-old girl has been hospitalized and is in critical condition after being struck by a school bus while crossing the street near Federal Way High School Thursday morning.

According to news reports, the girl was in the crosswalk at South 308th Street crossing Pacific Highway South Thursday at approximately 7:45 a.m. when a Federal Way Public Schools bus hit her in the crosswalk. She reportedly suffered serious injuries and was taken to Harborview Medical Center to receive treatment, where a staff member reportedly confirmed that she is currently in critical condition.

Officials told KOMO News the school bus that struck the girl in the crosswalk was transporting students to nearby Nautilus Elementary School when the incident occurred. It is believed that the girl is a student at Federal Way High School and may have been on her way to class.

None of the students riding the bus at the time are believed to have been injured. The driver was reportedly placed on administrative leave, which is in accordance with standard procedure after an auto accident that results in serious bodily injury.

“We don’t know the circumstances of this accident,” said Deb Stenberg, a Federal Way Public Schools spokesperson. “The safety of our kids is the highest priority, our bus drivers undergo a significant amount of training before they’re put in charge of a bus. The district will have counselors at Federal Way High School, at the transportation department to talk to bus drivers and at the elementary to speak with the students on the bus.”

Both streets near the intersection were taped off and closed to traffic while police are investigating the scene and trying to determine any and all possible contributing factors. Specifically, police said that they were trying to determine if the bus’ mechanical systems were functioning properly.

It is unclear how fast the bus was traveling at the time of the incident, and we will continue to update this story as more information becomes available.