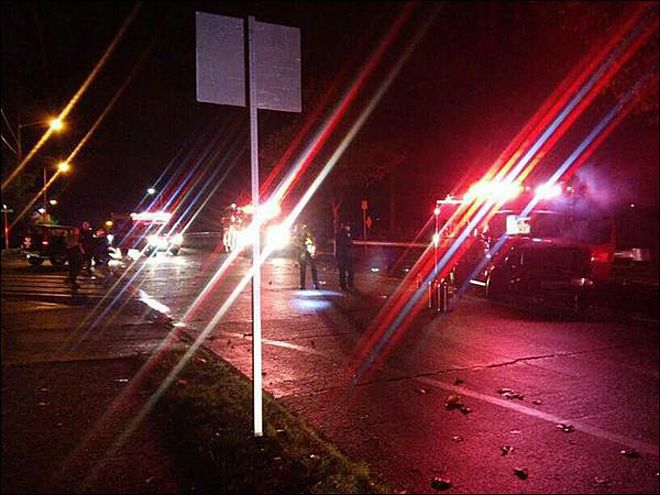 A group of three firefighters was injured in a car collision Sunday night after an 18-year-old woman ran a stop sign and crashed into the aid car that was transporting them.

According to news reports from KIROTV.com, an unidentified 18-year-old woman was driving her Jeep SUV near NE 185th Street and 5th Avenue NE in Shoreline just after 10:30 p.m. Sunday when she ran a stop sign and crashed into an aid car.

The aid car was transporting a group of firefighters from an emergency call back to the station. The crash severely damaged the aid car, reportedly to the point where it experienced an electrical fire.

The driver of the Jeep and her passenger were uninjured, but three of the firefighters inside of the aid car suffered significant injuries in the collision.

After the vehicle fire was extinguished and the firefighters were taken to a hospital for evaluation of their injuries, police interviewed the driver of the Jeep and cited her for running the stop sign. A firefighter spokesman said none of the victims’ injuries were believed to be life-threatening.

The fact that the driver of the Jeep was ticketed pretty clearly establishes liability on her part for causing the collision by running the stop sign. This is a good sign for the injured victims as clear liability makes pursuing a personal injury claim much easier.

Since the firefighters’ injuries were due to the negligence of another person or entity – and not on the part of their employer – they would be able to pursue a personal injury lawsuit against the at-fault driver and her insurance company.

Washington state law prohibits an injured person from suing their own employer for negligence, and those claims must be brought through the Washington State Department of Labor & Industries (usually just called "L&I"). These claims are more complex and typically require the assistance of an attorney who solely handles L&I claims. Since the firefighters in this instance were injured due the negligence of a party that is not their employer, these limitations will likely not apply.