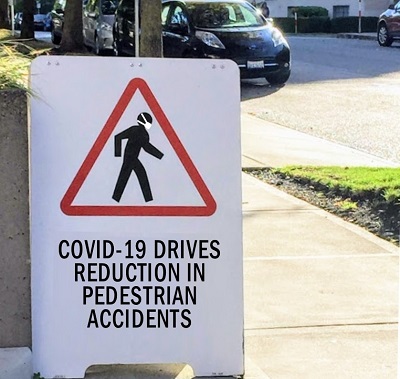 Davis Law Group’s investigation team analyzed all (weekday and weekend) pedestrian accidents (struck by vehicle) in King County for the second and third week of March 2017 thru 2020 in order to see the impact of reduced pedestrian traffic due to COVID-19.

To account for the possible influence that differing weather from year-to-year may have on overall pedestrian traffic and accidents, we averaged the data for 2017, 2018 and 2019.

In Seattle, there is typically an average of 26.6 accidents involving pedestrians each year during the 2nd and 3rd weeks of March.  However this year, there were only thirteen (13) pedestrian accidents in Seattle representing a fifty-one percent (51%) reduction.

Both Aurora Avenue North and Rainier Avenue South typically experience at least one pedestrian accident per week, however both have been relatively incident free during the Coronavirus crisis.

The City of Auburn also saw a dramatic decrease in pedestrian accidents. On average there are 5.67 pedestrian accidents in Auburn during the second and third weeks in March.  This year there was only 1, representing an eighty-two percent (82%) decline.

In 2017, Bellevue had nine (9) pedestrian accidents in mid-March.  This year there was only one (1), representing an eighty-nine percent (89%) decline.