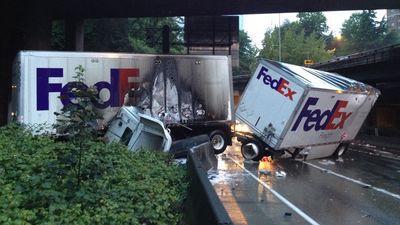 Seattle-area traffic was snarled for hours Wednesday morning after a FedEx truck crashed near downtown Seattle, crashed into a guardrail and caught fire.

According to the Washington State Patrol (WSP), a man was driving a semi truck towing two FedEx trailers just before 4:30 a.m. Wednesday on southbound I-5 when the vehicle in front of him slammed on its brakes. The truck driver also applied the brakes on the semi truck, which caused the vehicle to lose control and jackknife before crashing into a guardrail.

The domino-effect collision caused by the multiple trailers crashing into one another eventually resulted in the truck’s cab catching on fire. Fortunately, the driver of the semi truck was able to crawl out of the windshield of the cab and escape the fire.

According to WSP Trooper Julie Judson, the wet morning weather conditions may have been a significant contributing factor to the cause of this accident. Troopers also believe that the driver of the semi truck may have been driving the vehicle too fast for conditions.

All types of motor vehicle accidents have the potential to negatively affect traffic and create longer-than-usual commutes for drivers in the area. But because of the sheer size of semi trucks and tractor trailers, accidents involving semi trucks and other large vehicles almost always snarl traffic. In the accident Wednesday morning, police reported at least a seven-mile backup for drivers from downtown Seattle all the way to Lake City.

To add to the already complicated situation on I-5 Wednesday morning, the increased traffic led to several other car accidents in the area of traffic that was already backed up. Naturally, this made Wednesday morning’s commute even more disastrous.

The semi truck accident also reportedly occurred a mere feet away from a homeless camp in downtown Seattle, but a news report from KIRO 7 indicates that nobody was hurt in the crash despite the fact that the vehicle caught fire and that fuel was spilling onto the roadway.