Bicyclist Killed in Collision with Semi Truck in Spokane 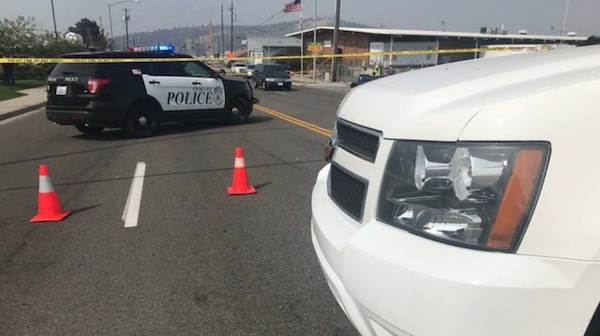 A bicyclist was killed in a collision with a semi truck Tuesday in north Spokane, according to the Spokane Police Department.

The incident occurred around 12:30 p.m. on Havana Street. A 56-year-old man was ride his bike northbound and entered a construction zone near the intersection of Havana Street and Boone Avenue.

Reports say that Havana was closed to northbound traffic because of the construction. According to police, the bicyclist passed a series of cones, a sign saying the road was closed and a flagger at the intersection directing traffic.

At the same time, an H&H Express freight semi truck traveling north was being directed to make a right-hand turn into Oak Harbor Freight Lines parking lot. The bicyclist was riding on the sidewalk and turned into the right lane, colliding with the rear of the semi.

Lifesaving attempts were made but the bicyclist was pronounced dead at the scene. The semi truck driver was not injured.

Police interviewed witnesses and looked at security video of the incident, which showed the semi truck driver did not appear to be impaired and that speed was not a factor.

Police found a bike helmet on the ground at the scene. They don’t know if the bicyclist had the helmet securely fastened.

As of Tuesday, the semi truck driver has not been cited with any infractions.

The police investigation is ongoing.

Some drivers look at construction zones as a hassle, an area where the rules don’t apply to them. You may see people try to maneuver through them illegally and unsafely, which may put you and your family at risk.

Dangerous acceleration, failure to yield the right-of-way, sudden turns, failing to use signals, and sudden braking are all common ways that construction zone accidents occur.

And when a large truck is thrown into the mix, these accidents can be deadly.

Trucks in construction zones have less room to maneuver, and the tight quarters mean conditions that frequently cause accidents.

According to Federal Motor Carrier Safety Administration (FMCSA), about 25 percent of all fatal accidents in work zones involve a large truck. So whether the truck driver, another driver, the construction company, or other negligent party were responsible for your accident, you need help.

If you have been seriously injured or have a loved one that suffered injury or death in a car accident in Washington state, you may benefit from consulting with a personal injury attorney. The lawyers at Davis Law Group, P.S., offer free case evaluations and operate on a contingency fee basis, meaning we don’t get paid unless you win.

Contact the attorney Chris Davis and the legal team at Davis Law Group. We will work quickly to get you the compensation you deserve. Our law firm has experience in fighting to protect the rights of accident victims, and we can help you.