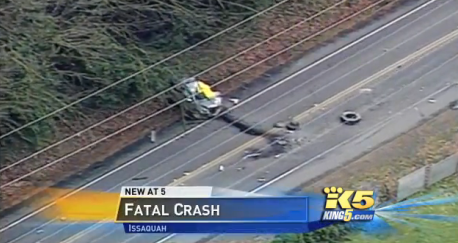 Officials with the King County Sheriff’s Office (KCSO) say that an elderly man was killed in a truck accident near Issaquah Wednesday afternoon.

According to KCSO spokeswoman Cindi West, an elderly man believed to be approximately 90 years old was driving on Issaquah-Hobart Road near Tiger Mountain in Issaquah when he was involved in a head-on collision with a large dump truck that was carrying gravel.

West also noted that the elderly man who was involved in the accident was pronounced dead at the scene, at the intersection of Issaquah-Hobart Road Southeast and Southeast May Valley Road, just before 3 p.m. There was no available information regarding any possible injuries that the dump truck driver may have suffered in the accident.

Since this was a head-on collision, it is likely presumable that one of the vehicles involved in the crash crossed the centerline and made its way into the opposite lane of traffic. Interestingly, witnesses who were driving near the accident scene reportedly claimed that the elderly driver was driving erratically in the moments leading up to the accident. Though this has not been confirmed by the authorities, it could shed some light on the circumstances that contributed to the collision.

When motor vehicle collisions result in the death of a person, the responding police officers will perform a systematic investigation into the accident in order to identify who may have been at fault for the crash, in addition to whether or not any criminal charges should be filed. The police investigation will also be relevant in the event of a personal injury or wrongful death claim, as the insurance companies involved will use police officers’ findings to determine any financial liability on their part.

As one can imagine, there are a lot of factors at play in accidents like these and many of these factors are time-sensitive, making it even more important for victims and their loved ones to act quickly. Consulting with a personal injury attorney who has experience handling devastating car accidents may give victims and their loved ones an advantage in properly pursuing a claim.