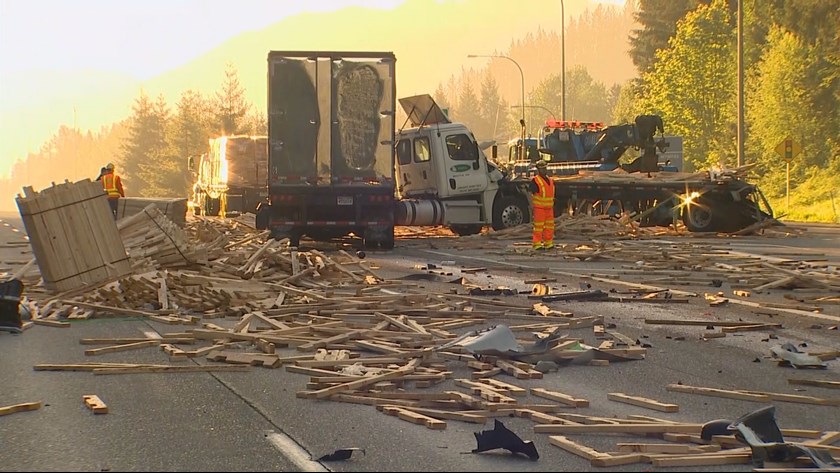 The eastbound lanes of Interstate 90 were blocked this morning after two semi-trucks collided. The crash happened near State Route 18, west of Snoqualmie, at roughly 4:30 a.m.

No serious injuries were reported as a result of the crash. Investigators have not yet shared details about what they believe caused the accident.

The eastbound lanes of Interstate 90 are seeing heavy use today, as vacationers head away from Western Washington for the long memorial day weekend. The roadway was reopened at approximately 9:30 a.m.

Not the crash you were looking for? Click here for a full list of recent semi-truck accidents on I-90 in Washington State

When an item falls off a truck or other vehicle, that doesn’t mean that the driver’s no longer responsible for it. Truckers and trucking companies have a legal responsibility to secure their loads safely, and if someone is hurt by an item that should have stayed on their truck, they can be responsible for paying for that person’s medical bills, lost wages, property damage, and other expenses.

At highway speeds, even objects that look harmless can cause major accidents. Tiny pieces of gravel can crack windshields. Sheets of plywood can slam through windshields and bowl over motorcyclists. Large objects like logs and cut lumber can impale a vehicle and its driver or cause a potentially fatal crash.

In too many cases, a truck driver may not even be aware that they have lost part of their load. These truckers may make the situation worse by leaving the scene without realizing that an item has fallen off their vehicle. While police do their best to track down at-fault drivers, it’s not always possible to identify a truck based on a small piece of wood, rock, cement, or other debris.

Fortunately, emergency responders were able to get to the scene quickly and clear the roadway before anyone was seriously hurt today.

At Davis Law Group, we’ve recovered millions of dollars for the victims of semi-truck accidents and their loved ones. Our award-winning legal team is familiar with the complicated factors to consider in logging truck accident and unsecured load accident cases. You can speak with our legal team at any time by using our convenient chat feature, visiting our contact form, or calling (206) 727-4000.

(Image: Lumber scattered over the eastbound lanes of Interstate 90 after a semi-truck lost its load during a crash. Despite the dramatic scene, no major injuries were reported. Image source: KING5 news)