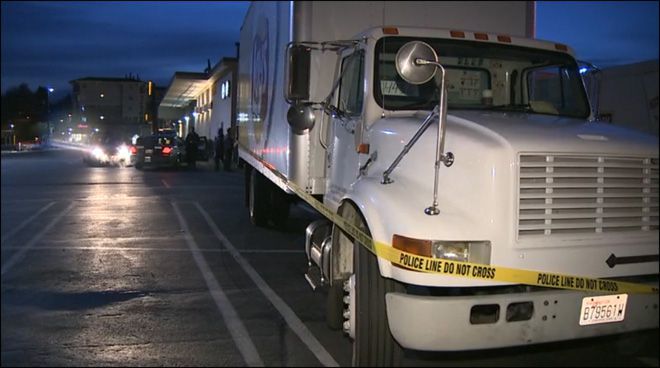 According to Seattle Fire Department, a 71-year-old was sent to Harborview in serious condition after a flat bed carrying construction equipment rolled backwards over the sidewalk and struck him before going though the window of a dentist’s office.

According to Q13 News, The accident took place near 12th and pine where the truck, which was hauling a 27,000 lb. excavator on a flatbed, was parked before rolling down the street and over the sidewalk in seconds with no driver inside to stop it.

Witnesses from inside the salon next door reported the impact being so powerful they feared the building would collapse, and according to Seattle police both structural and civilian damage could have been far more sever if the runaway truck had continued rolling straight rather than jackknifing where it did.

According to a witness the truck appeared to have large blocks or “chocks” behind its wheels but rolled over them regardless. There has been no response at this time from the company who owns the vehicle, but investigators are looking into what could have caused the truck to lose control and determining exactly who is at fault for the crash.

While investigations continue, it is encouraging to hear from hospital officials that the unnamed man’s injuries do not appear to be life threatening.

While police are conducting their own investigation, it is often best practice for those harmed in a trucking accident to have one conducted on their behalf as criminal and civil liabilities may differ. A civil investigation could focus on things such as company policy, enforcement or training to determine who would be held most liable however in many cases, liability can fall on both driver and company.