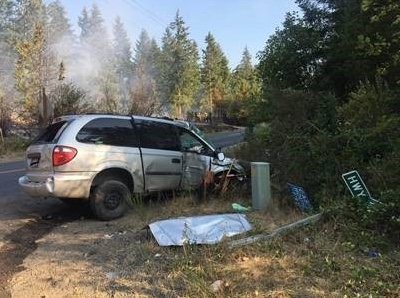 A suspected drunk driver caused a two-vehicle crash that killed three people Monday near Roy, according to the Washington State Patrol.

The incident occurred around 4:15 p.m. at the intersection of State Route 702 and 8th Avenue South.

According to the State Patrol, the driver of a Dodge Caravan was traveling south on 8th Avenue South when she ran a stop sign and hit a Toyota RAV4 that was heading west on SR 702.

Three people inside the RAV4 were killed. The driver and a 4-year-old child were taken to nearby hospitals with serious injuries.

The driver who caused the crash, a 36-year-old Lynnwood woman, was arrested on suspicion of driving under the influence and three counts of vehicular homicide. She was also taken to the hospital with injuries.

The crash also started a brush fire that burned about 10 acres. A power pole was knocked down and the power lines dropped on dry brush and sparked a fire. The fire was quickly contained.

Police said the road was blocked for more than six hours. The crash remains under investigation.

Lawsuits stemming from a DUI are almost always more complex than a typical car accident. These crashes require more investigation and a deeper understanding of the law.

In order to grasp the full scope of the DUI collision, the right attorney will check to see if the case involves:

READ: Factors That Affect The Value Of A Wrongful Death Case

Damages in a Wrongful Death Case

Damages in a wrongful death case can total in the millions depending on the deceased and the circumstances of the incident. But generally, families of the deceased can recover financially for both the economic loss and the emotional loss of a loved one.

Attorney Chris Davis and his staff always remain compassionate and understanding during this time of grief for the victim’s family. We are here for you.

Discuss your case today with us to start the legal process. To schedule a free case evaluation, call (206) 727-4000, use the chat feature below or fill out the form on this page to get started.