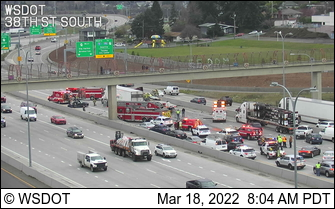 Troopers first responded to the scene just before 8 a.m on I-5 North at S 38th St in Tacoma. According to reports, seven people were injured, with one pronounced dead at the scene.

Four people were transported to the hospital, one as a precaution, two in serious condition and one in critical condition. The other two victims were treated at the scene and released. One of the semi-truck drivers was arrested for DUI, according to officials.

A case like this s incredibly tragic. The scale of the crash alone can be hard to understand, never mind the number of lives impacted by one person’s decision to drive while intoxicated. The victims of this crash and their families should be able to recover in peace, rather than worry about dealing with the insurance companies and hospital bills.

The complicated nature of this crash is not going to become any less complicated in the insurance claims process. It is likely that the investigation is going to take quite a while The victims and their families should not hesitate to consult with an experienced semi-truck accident attorney.

The recovery options will vary depending on each person’s situation, but one thing they all have in common is the ability to file a claim against the driver who was arrested, and their trucking company if the investigation determines they were at-fault for the entire crash. That claim should not be put off pending the outcome of the criminal case, as criminal and civil cases can happen congruently.

Depending on each person’s level of insurance, claims can be made against their own policies as well if they have personal injury protection, and potentially their underinsured motorist insurance as well. The other semi-truck driver, who was not arrested may have an L&I claim if they were injured as well.

For the family of the victim that tragically lost their life, they can make claims against their loved one’s insurance policy to cover funeral costs, while also filing a claim against the at-fault driver.

Because this case is bound to be extremely complicated, it is in the best interest of the victims to consult with an attorney as soon as possible. The recovery and grieving process should be the priority and allowing an experienced legal team to handle the claims process will allow that to be the case.

Davis Law Group has handled semi-truck accidents for over twenty years. Free consultations are available upon request to accident victims and their families. To schedule a case evaluation, use the contact form or chat on this page, or call 206-727-4000.