Various media outlets are reporting a tragedy today on the Aurora Bridge: a collision between a charter bus and a Ride the Ducks amphibian tour craft has resulted in four fatalities and at least twelve critical injuries (at least twelve non-critical injuries have also been reported). The collision occurred around 11:10 am. Complicating the emergency response were the traffic conditions brought on by the Chinese President's departure. 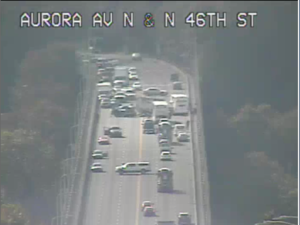 Investigators are in general agreement about how the collision happened: the Ride the Ducks tour vehicle was trying to adjust its trajectory when it overcorrected and slammed into the center of the charter bus. The investigation is ongoing.

Priority was given to immediate medical response to the injured and transporting the most injured to Harborview Medical Center (response to the collision has been described as "all hands on deck"). The image accompanying this article was pulled from a Seattle Department of Transportation camera on the Aurora bridge.

-An initial witness statement indicates the Ride the Ducks tour craft may have drifted slightly to the right, overcorrected, and struck the middle of the charter bus. Other witnesses have come forward and corroborated this assessment.

-Approximately 75 passengers were involved in the duck boat accident, though that number is an estimate based on reports from investigators on the scene. An official with the fire department says that 30 passengers have been cleared by triage workers on the scene.

-North Seattle College has confirmed that a large number of the passengers on the charter bus were staff and international students.

-Early information indicates that the fatalities were passengers on the charter bus.

-Initial reports suggested only 2 passengers had died as a result of the collision. As of 12:50 media reports updated the number of fatalities to 4. The number of critical injuries also increased from 9 to 12.

-The president of Ride the Ducks commented on the tragedy, saying that safety was the number one priority for his company.

Legal Implications of the Ride the Ducks/Charter Bus Collision

According to news reports about this tragic collision, investigators discovered that the axle of the Ride The Ducks vehicle had been sheared off. Though it is unclear whether the axle problem occurred before or after the collision, the company has admitted that the vehicle involved had not undergone a recommended axle repair service as a result of deficiencies with the part.

Perserving the legal options of these victims hinges on the investigation of the accident, which got more interesting this week when the UTC filed a claim agains Ride The Ducks of Seattle.