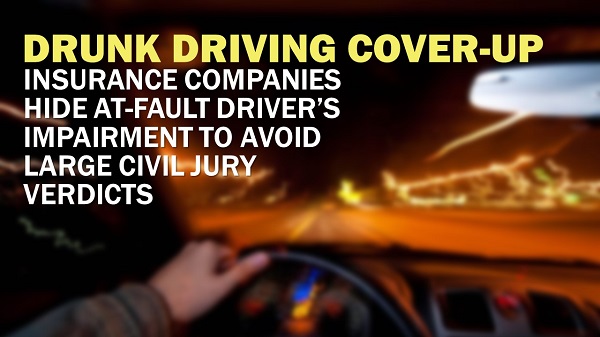 Pre-Trial Motion To Exclude Evidence of Alcohol Use And History

Insurance companies are painfully aware that juries are fed up with drunk and/or drug-impaired drivers that cause collisions.  When a family loses a loved one or a person is injured or seriously disabled in an impaired-driving car crash outraged juries in civil lawsuits often give victims/survivors substantially higher awards for damages.

On the surface, civil lawsuits against impaired drivers seem relatively straight-forward, but defense attorneys and insurance companies spend significant amounts of time and money defending against impaired-driving claims, and trying to minimize the amount that they will have to pay.

The insurance defense lawyer’s favorite tactic is to admit liability (i.e. admit that their insured was at fault for causing a car accident) and then make a pre-trial motion to exclude evidence of alcohol or drug use and related history of use.

If the at-fault party’s insurance company admits liability, then the only issue for a jury to consider is how much money to award for damages.

Insurance defense attorneys argue that any evidence of the at-fault driver’s drinking leading up to the accident and his/her history of alcoholism is irrelevant to any of the issues to be tried and would only serve to inflame the juror’s emotions, creating a substantial danger of undue prejudice.

‘ Undue prejudice,’ in this example, means the jury gets upset at the driver and gives a higher award.

A man is consuming alcohol while on the job and driving a company-owned vehicle.  He causes a fatal car accident that takes the life of a woman who is a loving wife, caring mother and upstanding citizen.  The victim was trapped in his vehicle for 30 to 45 minutes after the accident and suffered a painful death.  The driver pleads guilty to charges of vehicular homicide and serves a long prison sentence.

The drunk-driver was acting within the course and scope of his employment at the time of the accident.  Evidence comes to light that proves that the drunk driver’s employer knew that he had a history of alcoholism; showed up for work drunk on multiple occasions; went on drinking binges during work-trips; would sometimes drink on the job; etc. but took no action.

The employer’s insurance companies refuse offer a fair settlement and the case is scheduled for trail.  The insurance defense attorneys file a motion to admit liability a ‘motion to exclude evidence of alcohol use and history’ stating ‘because defendants have admitted vicarious liability, evidence of alcohol use and history of alcoholism is no longer relevant to any remaining issues in the case.’  The insurance lawyers argue that any reference to alcohol or the cause of the crash is unrelated and irrelevant to the calculation of compensatory damages.