UPDATED! Drones Proliferate But Their Legal Future Is Still Up In The Air

UPDATE: Amazon has been... in the news lately. But Jeff Bezos still insists that drones are the future and that they'll be so common that in the future they'll be viewed like mail trucks. But sometimes delivery vehicles fail to live up to proper safety standards. 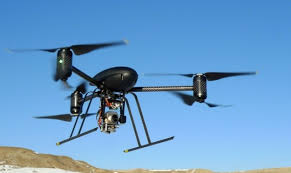 West, in deposition for a lawsuit against a paparazzo, complained of the increasingly available consumer-grade quadrocopters that were trying to snap some tabloid photos of his family. Drones like that aren’t monitored by any third-party—only the party they’re monitoring. The concern may be valid. Kanye West is at least as famous as the Seattle Space Needle and it recently had a run in with a drone as well.

“Run in” isn’t the most precise term. An unnamed Amazon employee and drone enthusiast flew his quadrocopter close to the Seattle landmark. Witnesses claimed that the drone crashed into the building, but the drone itself was recording footage that showed it never actually came into contact with the structure. The drone’s footage prevented the police from taking action against the hobbyist.

Amazon, the hobbyist’s employer, wants to get in on the action by whisking products to its customers via Prime Air’s skybots. For a time the Seattle police were planning on getting in on the drone game using a grant from the Department of Homeland Security. This move was understandably protested by privacy rights advocates, and we expect that will remain the case for the forseeable future.

Reason to Worry About Drones in the Sky?

Some tech experts claim that drones will never be that vital to businesses nor consumers, claiming the technology is too untenable. They’ll fade out like laser pointers.

But even if drones are a fad, they will mostly likely be a fad the tech sector refuses to let go of. But there are a number of smart people who believe drones will be a new metropolitan fixture, the next pivot to outfit the urban landscape to serve the individual. Predictions like these always sound strange at first. After all, the celebrated but controversial futurist Ray Kurzweil rose to prominence for predicting the collapse of the Soviet Union when the general consensus was that the USSR was here to stay.