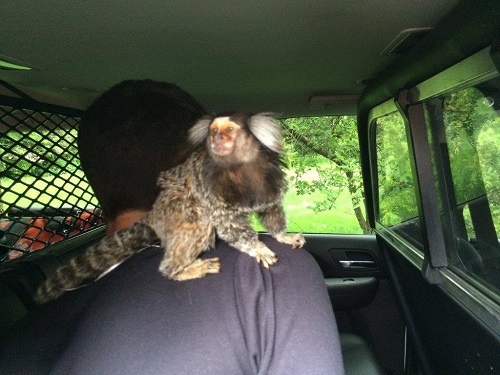 Police officers who responded to the scene of a car crash on Wednesday had to search for the driver who caused the wreck. A Washington State Patrol trooper had called in a report of a black 2016 Honda Accord traveling along Highway 509 at 112 miles per hour.  Burien police found the car abandoned after the driver crashed into a rock in someone’s front yard. The suspect had fled from the scene on foot before police arrived. Witnesses were able to provide an identifying detail: the man had a monkey on his back.

Yes, that’s right, a literal monkey. Specifically, a marmoset, a new-world genus of long-tailed, round-faced monkey. While marmosets are often kept as pets, Animal Control officers who responded to the scene had to research whether it was legal to own a marmoset in Washington state. Marmosets are classified as exotic wildlife, but as of 2012 Washington was one of 17 states with no restrictions on keeping monkeys as pets. Some local cities ban owning monkeys within city limits.

Using the witnesses’ descriptions, police caught their suspect quickly. “There’s not a lot of people running around with monkeys on their back,” Burien police Captain Bryan Howard told reporters.

Police snapped a photo of the driver in custody with the marmoset clinging to his back. No injuries were reported to the primate “partner-in-crime,” as police referred to the monkey.

The man, sans monkey, was booked into the Correctional Entity Regional Jail in Des Moines. The monkey refused to cooperate with officers, so police called the suspect’s mother to pick up the primate. In a statement released on Facebook, the Burien Police Department said:

Once we determined the monkey was not the driver, we released him to a family member since he was only engaged in monkey business.

It’s not often that police get a chance to go bananas with their press releases.

If you have been in a distracted driving accident, contact Davis Law Group.