There has been much debate about the legal drinking age in the United States (critics often bring up the point that young people can vote, fight, and die for their country before they can drink in it).

With help from MADD, we addressed some of the more common questions about the legal drinking age and provide information to help America’s youth understand the reasoning behind waiting until the age of 21 to legally drink alcohol.

History of the Drinking Age Law

States used to be able to set their own minimum drinking ages. This eventually led to the popular culture references of state lines as “blood borders” because teens would often go to another state to drink legally and then drive home under the influence.

The 21 Minimum Drinking Age Act was signed by President Ronald Reagan on July 17, 1984. All 50 states and Washington D.C. had officially passed measures to put the minimum drinking age of 21 into effect by 1988.

Why Legal Drinking Age Increased from 18 to 21

Before the minimum age was set to 21, there was a significant amount of fatal car accidents mainly involving the 18-20 age group. When the law was passed, alcohol-related deaths made a dramatic decrease- up to 28 percent in many states.

Also, the brain does not stop developing until the early 20’s, and alcohol can hamper development, especially impacting memory, judgment and learning capabilities. So this law is helping growing brains by allowing them to mature before alcohol is consumed legally.

Research shows that the 21 law saves about 1,000 lives per year and if the drinking age was lowered, fatalities would significantly increase and hamper such growing success.

More than 6,000 youth ages 15-20 die annually due to alcohol-related causes including homicides, suicides, and unintentional injuries such as traffic crashes, drowning, or falls.

How Has Minimum Drinking Age of 21 Made an Impact?

Studies have shown that education and stricter DUI penalties are not effective in reducing youth drinking. After the 21 drinking age law was enacted, there was an immediate decline in alcohol-related crashes among the 18-20 year-old age range. This proves that environment change is needed to achieve long-term changes that effect alcohol assumption in teens.

How Underage Drinking Changed Since Federal Law Passed in 1984 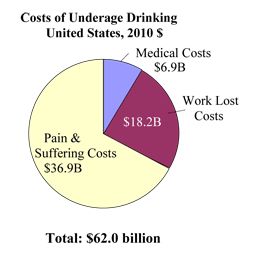 This is in comparison to the $1.8 billion spent annually on prevention of illicit drug abuse, not to mention the countless billions of dollars that are poured into alcohol advertising and promotion each and every year.

As you can see in the table to the right, the residual costs of drinking and driving extend beyond the direct costs typically resulting from a DUI collision. The extensive medical bills, pain and suffering, and lost wages, employment, and even earning capacity really start to add up.