Distracted Driving Study: How Does Washington Stack Up? 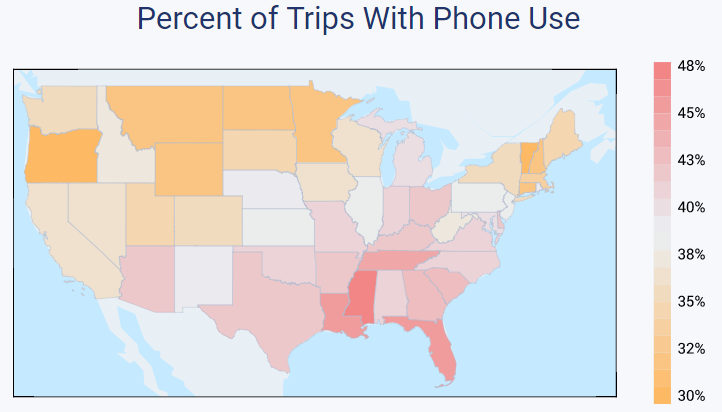 Curious how Washington State stacks up nationally for distracted drivers? Everquote, an online insurance marketplace, has that data.

Everquote took information gathered during 2.7 million car trips over 230 million miles by users of its EverDrive app between April 2016 and March 2017. The app uses smartphones to detect speeding, as well as signs of distraction such as phone use and sudden stops, turns and acceleration.

The study found that phone use – otherwise known as distracted driving – occurred in more than two out of every five (38 percent) trips taken. Washington had the 17th best drivers in the country, and when it came to phone use behind the wheel, ranked 17th, with 35 percent of drives containing at least one distracted driving event.

Everquote cited a recent study by Cambridge Mobile Telematics, which found more than 50 percent of crashes occurred after the driver had used a phone. Additionally, those drivers were distracted for an average of 135 seconds before the crash.

The Top 5 States For Distracted Driving

The Bottom 5 States For Distracted Driving

According to the Washington State Department of Transportation, 12,314 car accidents were attributed to distracted driving in 2016. Distracted driving accidents amounted to roughly 199 serious personal injuries and 77 fatalities. But remember, these numbers may be on the low end as people generally don’t admit that they were on their cell phone just prior to their accident.

On July 23, 2017, a new distracted driving law went into effect in Washington State. Drivers are not allowed to hold electronic devices such as phones in their hands at all while they are on the road. The fine for a first offense is $136; subsequent fines rise to $235.

Beginning in 2018, no warnings will be given to drivers who hold their phones.

If you were injured in an accident in Washington State, the car accident lawyers at Davis Law Group, P.S., will investigate your case, and may help you obtain the compensation you need. For a free case evaluation with a Davis Law Group attorney, please call us at (206) 727-4000, use the chat feature below or fill out the form on this page to get started.