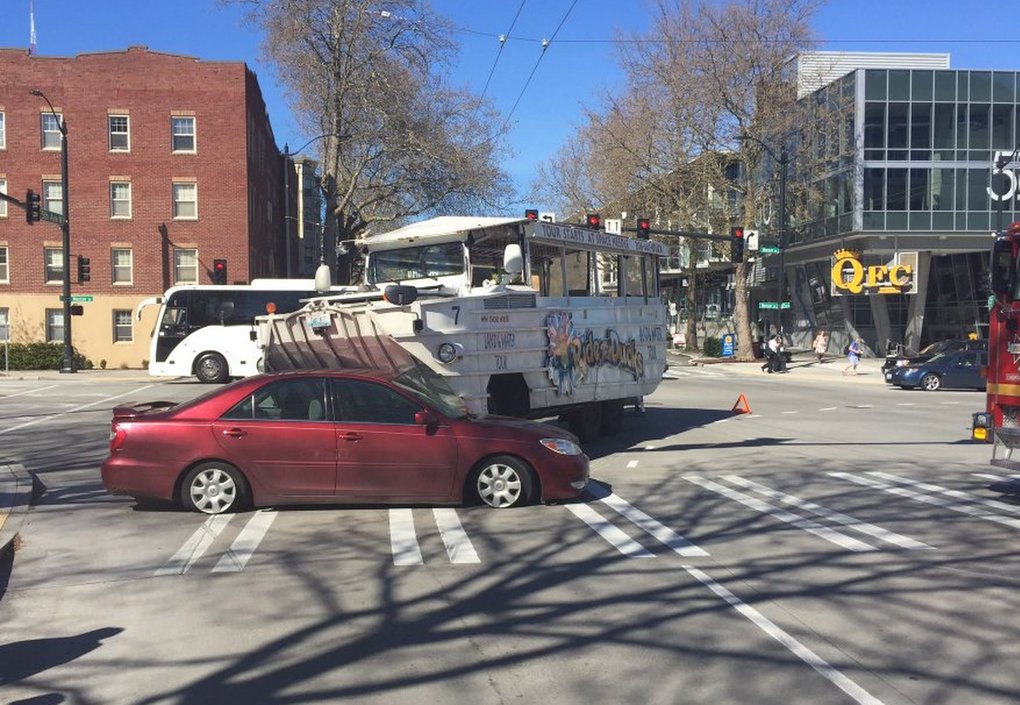 A young woman from Yakima was killed in a truck accident on Saturday morning after the driver of the SUV she was riding in fell asleep at the wheel and veered into a semi tractor-trailer. The driver was transported to Harborview Medical Center in serious condition. According to the Washington State Patrol, his charges are pending.

Rollover crash on I-90

Three people were injured near Moses Lake on Thursday when a 53-year-old Seattle man drove off the road and overcorrected, causing his vehicle to roll. The two passengers, a 13-year-old and a 17-year-old, were transported to a hospital with injuries. The driver was also injured in the crash.

When a Spokane County Sheriff’s deputy responded to a report of a stolen car on Saturday, the suspect initially pulled over for the officer but then decided to try to escape. He rammed the deputy’s car and fled, ditching his stolen 2001 Dodge truck. The truck rolled into a ditch and hit a tree, causing a power outage in the local area. But the suspect’s time on the lam didn’t last long; he was caught after a tipster alerted police.

Cyclist from Oregon killed during race

A young man from Oregon lost control of his bike and struck a guardrail during a race near Flaming Geyser State Park on Saturday. He was transported to Harborview Medical Center, where he died of his injuries.

A semi truck that overturned on Southbound 167 on Monday caused backups near Sumner. Crews reopened the highway at around 5 p.m. after clearing debris from the roadway.

A two car accident sent the drivers of both cars to the hospital after a 54-year-old man from Aberdeen tried to pass a 92-year-old woman from Grayland. The woman signaled a right turn, but went left instead, causing a crash with the driver passing on the left. Both drivers were cited for driving without insurance; the man was also cited for an improper pass and the woman for an improper signal.

After a car crashed into a pole in Seattle’s Rainier Valley on Thursday, police found at least 30 shell casings scattered around the scene of the accident. The investigation is ongoing, and details about whether anyone was injured in the accident have not been released.

A semi truck hit a child car seat that was abandoned in the middle of I-5 early this morning. The child seat punctured a gas tank on the truck, causing a leak that spilled an estimated 80 gallons of fuel on the road. Crews were dispatched to clean up the spill.

A car crashed into a building on Thursday night in Rainier Valley, causing a gas leak. Emergency responders closed off the leak within an hour. No injuries were reported as the result of the crash or the leak.

A semi truck accidentally took out a fire hydrant at 39th and Raymond in Seattle, sending a torrent of water down the street. Area residents reported brown water coming from their pipes and reduced water pressure as a result of the hydrant problem. No injuries were reported.

A Ride the Ducks vehicle crashed into a car at 5th Ave and Mercer in Seattle on Thursday afternoon. A witness reported that the Duck driver could not see the car in front of him and was initially unaware that the collision had occurred. Police believe the driver of the car caused the collision by cutting off the Duck. The Ducks, amphibious vehicles originally designed for wartime use, were only recently allowed back onto the road after a snapped axle caused a fatal accident on Seattle’s narrow Aurora bridge. Fortunately, no injuries were reported after yesterday’s accident.