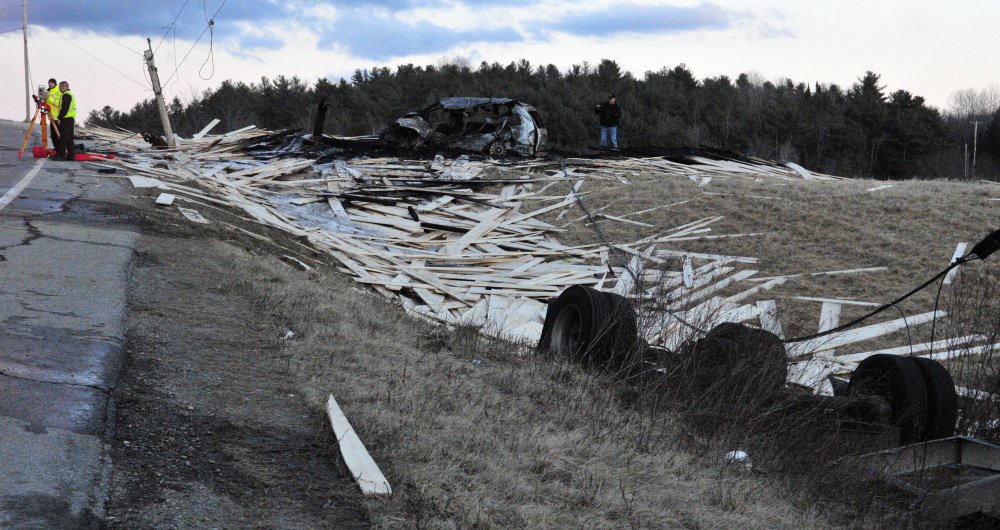 Two people were killed and three others were injured in a five-vehicle accident last Friday on Route 17. The accident was caused by a logging truck that rolled over on a curve in the road. Police identified Paul Fowles, 74, as one of the deceased.

The other deceased victim was badly burned in the crash, and police are waiting for an identification from the state medical examiner’s office before releasing that person’s name. Among the injured are Lowell Babb, 32, of Virginia; Tracy Cook of 51, of Union.

A young girl was injured on Interstate 90 on Sunday when the car she was riding in veered off the road and crashed through elk fencing. She was taken to a hospital in Ellensburg, treated, and released.

Semi-truck rolls over on highway

A semi-truck with two empty trailers rolled over on State Route 167 in Auburn on Monday. According to initial reports, the driver was not injured and no one else was involved in the crash. Police closed the southbound lane for several hours to investigate the scene and clear hazards from the road.

Arrest after crash in Federal Way

A four-vehicle collision on Interstate 5 left one woman on Monday. Police believe that drugs or alcohol may have been a factor in the collision, and they have arrested the driver who struck the woman’s vehicle.

A 53-year-old man was injured on State Route 12 on Tuesday when he spilled his drink, tried to catch it, and veered off the road and into a tree. He was treated at the scene for his injuries. No other cars were reportedly involved in the crash.

A Bremerton man was injured in a motor vehicle accident after he crashed his pickup truck into a guardrail on Tuesday evening. He was transported to Harrison Medical Center with injuries after the crash, and police have charged him with driving under the influence.

A woman who was apparently distracted by a medical issue drove through a fence and struck an employee of Rose Hill Car Wash on Wednesday evening. The driver was transported to a local hospital, and the employee she struck was taken to Harborview Medical Center for treatment of extensive leg injuries. Police are still investigating the incident.

Three children were injured in a single-car crash after Sally A. Larimore, 24, left the road and entered the median on Wednesday near Union Gap. The three children, ages 1, 2, and 6, were taken to a local hospital after the accident. Larimore was not injured in the crash, but investigators told reporters that she will probably be charged with driving under the influence.

An accident on Montlake Bridge on Wednesday took place just as rush hour was starting, causing traffic delays throughout North Seattle. All lanes were closed as a car was removed from the bridge. Early reports did not give any information regarding injuries or the cause of the accident.

Strange standoff after pickup crash on I-5

Police and car thieves ended up in a standoff on Wednesday morning when the driver of a stolen pickup truck struck a guardrail and got stuck. Police had been chasing the pickup, but ended the pursuit after the driver sped into a construction area. The trapped driver kept trying to accelerate, but only succeeded in burning the rubber off his pilfered tires. Police arrested the driver and a female passenger; the woman was later released, but the 31-year-old male thief was booked into King County jail.

Driver’s confession turns an accident into a homicide

Nearly four years ago, Samuel Hoffer veered off the road while driving and his car plunged off a cliff, killing Joseph Castro, a passenger in his vehicle. He told police at the time that he had swerved to avoid a deer in the road; he also said that the beer cans scattered around the scene were drunk by Castro, not by him. Years later, while taking a polygraph test as part of a job application, Hoffer revealed that he was drunk at the time of the crash and there was no deer in the road. He is now being charged with vehicular homicide.

One person was killed and another was injured in a motorcycle accident early this morning when two motorcycles crashed in the SoDo district of Seattle. Police have closed the southbound lanes of Airport Way in order to investigate the circumstances of the crash.

If you have been involved in an accident, contact a car accident lawyer at Davis Law Group.