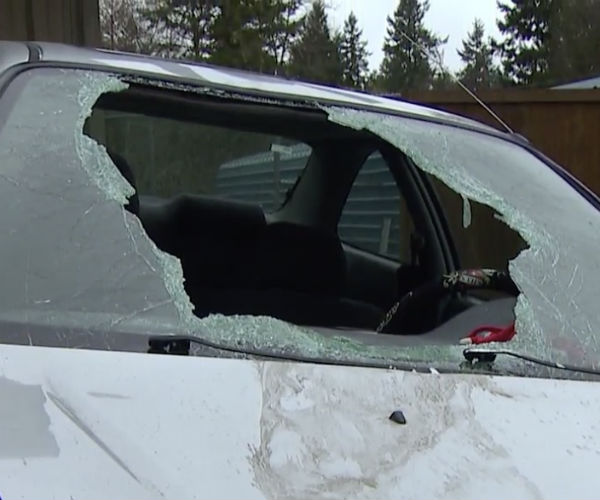 Aimee Blanton and her fiance Jeremy Deiter sustained only minor injuries when a semi-truck’s massive tire smashed through their windshield on State Route 303 near Silverdale. The driver of the truck had just put new tires on it, and one apparently came off on the highway. The Washington State Patrol called the incident a “freak accident” and are not holding the truck driver responsible.

Woman airlifted to hospital after hit-and-run

A Bellingham woman had to be airlifted to the hospital on Saturday after the Dodge van she was riding in crashed into a pole. Valentina Maria Arnold, 27, sustained a severe head injury and multiple broken bones in the crash. The driver of the van fled the scene and was tracked down by police dogs.

Wilfred Allen McLean, 24, was booked into jail after he was found. He faces charges of driving under the influence, circumventing an ignition interlock device, felony hit-and-run, and vehicular assault. McLean has a history of criminal behavior; he led police on a high-speed chase while drunk in 2011 and was found in possession of heroin after attracting the attention of police by crashing his car in 2012.

Two injured in crash in Everett

A two-car crash on Evergreen Way in Everett sent two people to the hospital on Monday. A teenage boy was taken to Harborview Hospital in critical condition; a 61-year-old woman was transported to a local hospital in serious condition. Investigators are looking into the facts of the crash, which occurred when the teen was driving northbound and the woman was driving southbound and turning.

A car slammed into the back of a Metro bus on Tuesday afternoon in the Capitol Hill neighborhood of Seattle, leaving three men with injuries. The car was on fire when firefighters arrived; one of the people injured in the bus accident had life-threatening injuries and the other two had less severe injuries.

Washington State police are raising concerns about the increasing number of drugged driving accidents involving synthetic marijuana. This drug, sometimes called Spice, is legal and unregulated, although getting behind the wheel high on it is still a crime in Washington State. A chemical compound is sprayed on waste plant matter and designed to imitate of the natural high of cannabis; it’s popular among people who must undergo drug testing for work.

While real marijuana is legal to consume in Washington State, companies (including the NFL) are still allowed to punish their employees if they test positive. Synthetic marijuana is more difficult to test for, but just as dangerous as the real deal on the road.

Calvin Green, defensive back at Washington State University, is facing charges of hit-and-run, reckless endangerment, and not having a valid license after being involved in two accidents on Monday night.

The first was a minor collision in which he backed his Ford Focus into a van. Although he tried to leave the scene, the driver of the van pursued him on foot and got his information. Green was then pulled over by the WSU campus police in a routine traffic stop and arrested after the officer smelled alcohol on his breath.

Troopers unsure what caused a head-on crash in Roy

Washington State Troopers are still investigating a head-on car accident on Wednesday. A 43-year-old woman’s car crossed the center line into incoming traffic in Roy, striking a tractor-trailer truck head-on. Investigators do not believe that drugs or alcohol were a factor in the crash.

Two serious crashes close to Morton in one day

The Washington State Patrol responded to a major collision on state Route 508 on Wednesday morning. Daniel D. Steig’s pickup truck had veered off the shoulder of the road and into a ditch. He died at the scene; his passenger Lloyd L. Wakeman was transported to Harborview hospital with injuries. A second crash on state Route 7 later the same day was between a car and a septic truck.