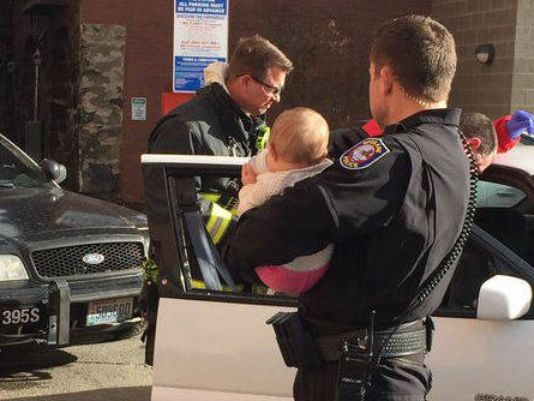 After responding to the scene of a multi-vehicle collision, Officer Shane Phillips of Spokane, Washington spotted a baby crying in the backseat. The baby’s mother was taken to the hospital with injuries, so Officer Phillips stayed with the child, feeding her and changing her diaper until Child Protective Services could arrive. The cause of the crash is currently under investigation.

Five people were injured in Deer Park, Washington on Wednesday in a crash at an intersection that residents have dubbed “Coffin Corner.” Two children were airlifted from the scene with life-threatening injuries, and three other people were treated for their injuries at local hospitals. Captain Megan Hill of Spokane County Fire District 4 described the corner for reporters, saying, “It’s kind of narrow. It’s getting dark kind of early. If there are two cars right behind each other, you can’t see the second car. It’s a very busy [road] and for how busy it is, it’s not very big.”

An Amazon delivery truck took a turn too fast in rainy conditions and smashed into the front doors of the ACT Theater in Seattle. There was damage to part of the building, but no injuries were reported. The truck was part of Amazon’s Fresh program, which delivers groceries, not packages. Police are planning to ticket the driver.

The son of Martin Buser, four-time winner of the Iditarod Trail Sled Dog Race, was critically injured in a car crash in Seattle this week. Nikolai Buser was listed in critical condition at Harborview and has undergone multiple procedures to alleviate pressure on his brain and fix a shattered bone.  Nikolai’s car was slammed into by an Uber driver; it was then pushed into traffic and hit by two other vehicles. Five other people were injured in the crash.

Four pedestrians were struck by a driver on Tuesday morning in a crash so violent that some of the victims were thrown into the arm. The crash happened at the intersection between Denny Way and Aurora Avenue in Seattle. The driver jumped a curb, hit the pedestrians, and hit a tree before leaving the scene. Police found her only a few blocks away; they are investigating the possibility that she was intoxicated at the time of the crash.

Alcohol may be to blame for Spokane Valley crash

Two women were seriously injured after a single-vehicle car accident in Spokane Valley early Thursday morning. The car, a Buick Skylark, was traveling at a high speed before it crashed into a cement retaining wall. Police are investigating whether the driver was intoxicated; she may face a charge of vehicular assault for injuring her car’s passenger.

A 61-year-old man was crossing the street in Mountlake Terrace when a 17-year-old driver blew through the crosswalk and struck him on Thursday morning. The pedestrian was transported to Harborview Medical Center for treatment. Police are still investigating whether the driver could have been distracted or intoxicated at the time of the pedestrian accident.