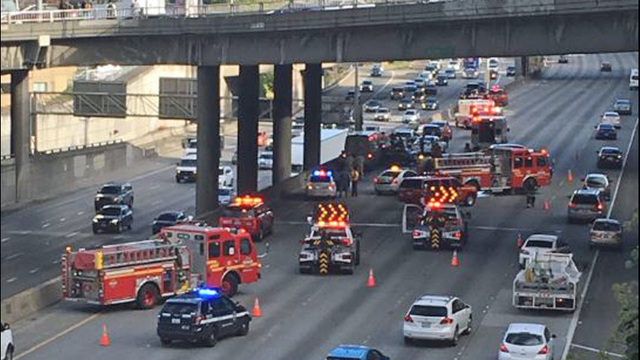 Emergency responders at the scene of a 6-vehicle crash in Seattle. Image source: KIRO News.

A star of the reality television show “Ax Men” died in a car crash on U.S. 101 near Port Angeles. The collision involved three cars. Gabriel Rygaard, 45, had been featured in a show on The History Channel about Rygaard Logging, his family-owned business. Six other people were involved in the three-car wreck.

A cyclist was found in the road with severe injuries to his arm and head after an apparent hit-and-run crash on Saturday night. Neighbors in the area stated that they did not witness the cyclist being hit, and never heard any impact. Police are trying to develop a description of the vehicle involved, and have asked anyone who might have information to come forward. The cyclist who was struck died several days after the crash.

A crash between a motor vehicle and a Sounder train in Seattle’s SODO neighborhood left the driver of the vehicle with injuries. The driver was extricated from his vehicle and taken to Harborview Medical Center for treatment of leg injuries; his condition was not believed to be life-threatening. Investigators are looking into the cause of the accident.

A six-vehicle pileup on northbound I-5 left one person with life-threatening injuries on Tuesday morning. The crash happened just south of the exit to Mercer Street, and apparently began when a car and a box truck collided. The four left lanes of northbound I-5 were closed while emergency responders rescued someone trapped inside a car, cleared the scene, and investigated the cause of the accident.

Two struck on the side of I-90

Two assistant basketball coaches from North Idaho College were hit by a Jeep while they were standing by the side of I-90 near exit 257. The two had exited their car after that vehicle struck a deer. A tow truck pulled up behind their disabled car with its flashers on. The Jeep then approached the scene, did not slow down in time, and veered onto the right shoulder. Both are expected to survive; one needed leg surgery, while the other sustained injuries to his foot.

Another child struck by car in Federal Way

Less than two weeks after a girl was struck by a vehicle outside of her elementary school, a 9-year-old boy was hit by a car while walking to the same school district in Federal Way. The driver who struck the child was cited for failing to stop for people in a crosswalk. The boy was airlifted to Harborview Medical Center and is reportedly in satisfactory condition. People who live near the accident scene told reporters that although the crosswalk near the school is marked by stripes, signs, and flashing lights, may drivers go too fast on that stretch of road and often fail to stop for pedestrians.

A speeding Mustang slammed into a pole near West Emerson Place, sheering the car into several pieces that scattered across the Burke Gilman Trail. The driver was apparently traveling at 90 miles per hour in a 35 miles per hour zone; somehow, he managed to avoid a collision with any other vehicles, and he walked away from the crash with no apparent injuries. Police released the driver, but are considering charging him for his clearly reckless behavior on the road.

A bicyclist who was riding on First Avenue Northeast was struck by a pickup truck traveling in the same direction. He was transported to Harborview Medical Center, and was pronounced dead at the hospital. The driver of the pickup truck showed no signs of impairment and was released by the police after cooperating with an interview.