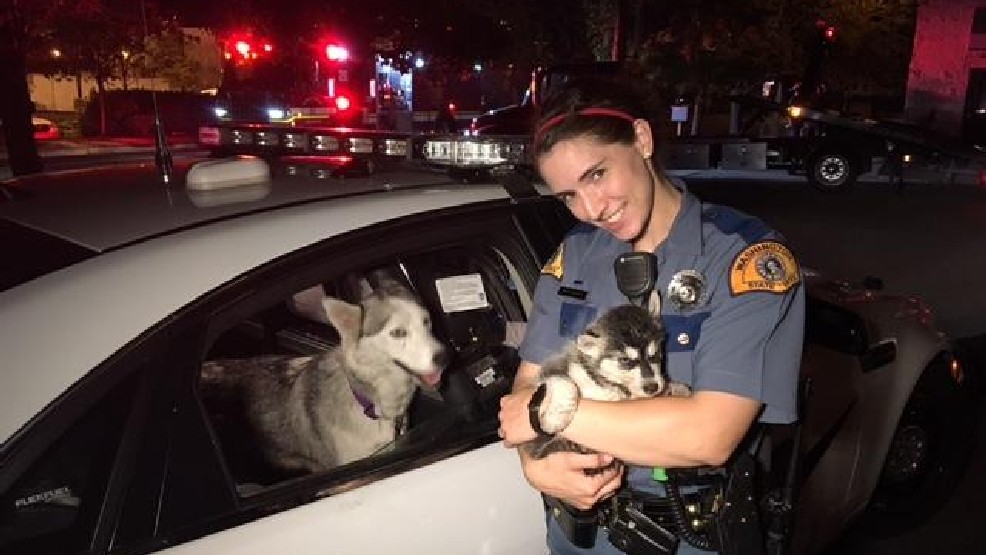 A trooper poses with a puppy rescued from a crash. Image source: KOMO News

A 4-year-old girl and her father were injured at the Southwest Washington Fair in Chehalis when a horse pulling a carriage got spooked and bolted through the fairgrounds. Both were transported to Harborview Medical Center in Seattle with serious injuries.

"They were facing away, they were thrown into the air and trampled by the horse and run over by the carriage,” the girl’s mother told reporters. The young girl was released from the hospital on Sunday; her father remains hospitalized with broken ribs, bleeding in the brain, a skull fracture, facial fractures, and a concussion.

A young man was taken to Harborview Medical Center after his motorcycle slammed into the side of a passenger car on Saturday night. He was listed in serious condition. Police are investigating the cause of the crash and have not yet stated whether drugs or alcohol were a factor in the collision.

Puppies rescued after I-405 crash

A van crashed on Interstate 405 in Kirkland when it crossed the barrier between a main line and an on-ram, then went over the edge and rolled down a hill. A trailer being pulled by the van was also involved in the crash. Washington State Patrol troopers stopped to assist the driver and to rescue a litter of puppies that had been in the vehicle. The driver of the van was transported to a local hospital with minor injuries.

Body found in pond after crash

Rescue crews in Newcastle found a man dead in a car that had veered off the road and crashed into a retaining pond. Firefighters estimated that the drop into the pond had been 30 feet; the car was upside down when rescue crews arrived. The deceased victim in the crash was a 57-year-old man. No passengers were found in the vehicle.

A man sustained serious injuries in a motorcycle accident on Interstate 5 on Monday afternoon. The crash happened near State Route 526, and three lanes of I-5 were blocked while investigators examined the crash site. Police have not yet stated whether another vehicle or road debris was involved in the crash.

Police had staked out an apartment in Seattle’s Bitter Lake neighborhood on Tuesday night, hoping to catch several suspects with ties to a car theft ring. When they moved in on those suspects, a woman jumped into a Ford Explorer and tried to escape, ramming a nearby house and the patrol car of an officer who had tried to block her from leaving. Backup units broke the Explorer’s windows when it appeared that she was reaching for a weapon. Police eventually managed to take the woman into custody and found that she had multiple outstanding felony warrants. No injuries were reported at the scene.

A truck accident involving a semi-truck that rolled over between Cle Elum and Ellensburg blocked multiple lanes of traffic on I-90 during the morning commute hours. Delays as long as 30 minutes were reported. No injuries were reported as a result of the crash.

One killed in truck accident in Bellingham

A man from Bellingham was struck and killed by a pickup truck hauling a cattle trailer on Wednesday night. The deceased victim was a pedestrian who was walking in a private driveway as the truck and trailer were turning around. He was found dead at the scene by emergency responders.

One killed in motor home crash on I-5

A woman from Arlington was killed when the vehicle she was riding in was rear-ended by a motor home on Interstate 5. According to police, the motorhome failed to slow for traffic and slammed into a van and a Toyota. One driver was injured in the crash and was transported to Harborview Medical Center.

A motor vehicle accident on the 520 Bridge during peak morning commuting hours left one car on top of another. Rescue crews had to contend first with completely stalled traffic, then the difficulty of moving a barrier out of place on the bridge to reach the trapped car.

A woman was killed and two other people were injured after a serious crash late at night in Tacoma. The deceased woman was the driver of a Kia Forte that collided head-on with a Dodge Magnum. The driver and passenger of the Dodge Magnum sustained minor injuries and were transported to a local hospital for treatment. According to investigators, the Kia turned left in front of the Dodge Magnum, crashing into it at full speed. They have not yet determined who was at fault in the crash.