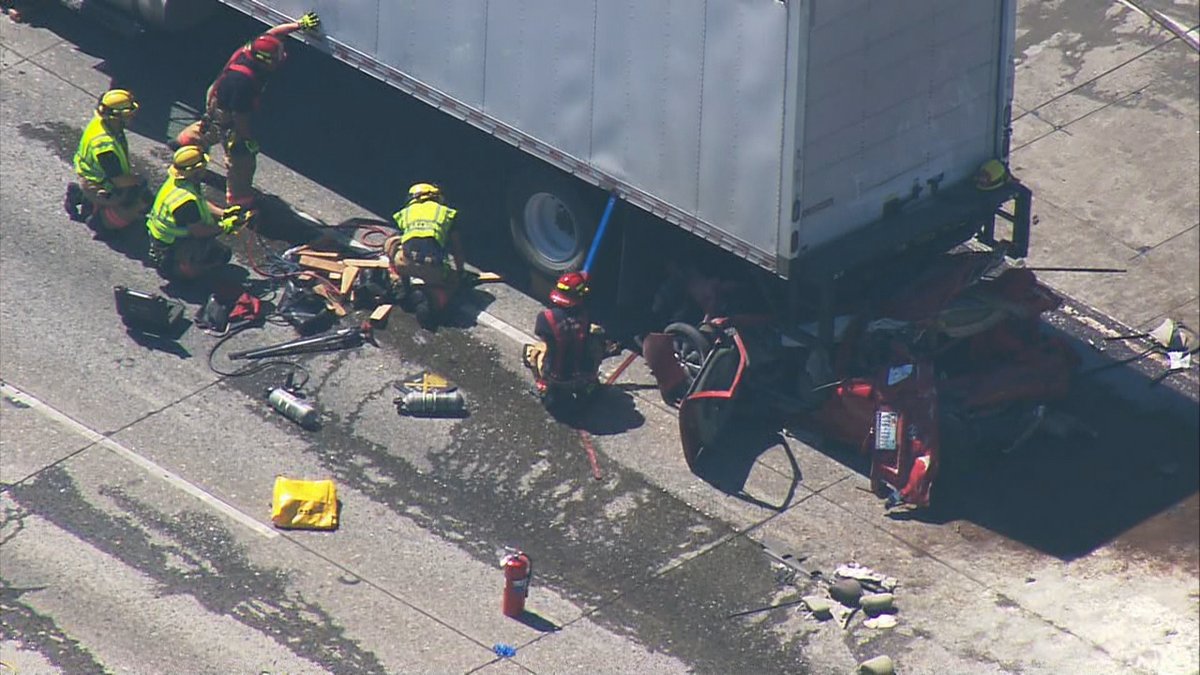 A passenger vehicle stuck underneath a box truck after a three-vehicle crash. Image source: KOMO News

A teenager from Everett was crossing a street in South Everett when he was struck by a car. Witnesses described the vehicle as a black Cadillac sedan from the 80s or 90s. The car apparently sped up before striking the teenager, then took off. The car’s driver-side mirror was ripped off by the force of the crash. The teenager survived, but has serious injuries and cannot complete his planned training at the U.S. Air Force boot camp.

One dead in Wahkiakum County Accident

A man from Vancouver is dead after his car left the road roughly 10 miles west of Cathlamet. His vehicle struck a telephone pole and several trees, then plunged down a 40-foot embankment. This appeared to be a single-vehicle accident with no other drivers or passengers involved. The Washington State Patrol is investigating the cause of the accident; they are not yet sure if drugs or alcohol were factors in the crash.

Chain reaction wreck on I-90 caused by one driver

A pile-up on I-90 began on Monday afternoon when a driver swerved to avoid traffic that was stopped due to an earlier collision on the highway. The vehicle that served rear-ended the car in front of it, causing a chain reaction crash involving six cars in total. Michelle S. Bailey, 33, was cited for failing to reduce speed for the conditions; another driver was cited for following too close. Two people were taken to a local hospital for treatment of injuries sustained in the crash.

One dead in Parkland crash

A stolen silver Saturn was traveling at high speed when it slammed into a green Mustang, sending the car airborne. The driver of the Saturn, a known counterfeiter with multiple previous convictions, was on the run from police; deputies had stopped a chase only minutes before out of fear that the driver would do something rash. The driver of the Saturn died in the crash, while the driver of the Mustang escaped without serious injuries. A third driver, a teenager who had just gotten his driver’s license, survived without injuries after the airborne Mustang flipped over his vehicle.

One rescued from overturned truck at Port of Seattle

Firefighters rescued a driver who had become trapped in an overturned loader truck at Terminal 46 at the Port of Seattle. The 50-year-old driver was taken to Harborview Medical Center for treatment of minor injuries.

I-5 closed by rolled over tanker

All lanes of I-5 were closed in both directions near Tacoma after a truck accident involving a tanker with a full load of gasoline rolled over in the roadway. The crash happened during the busy morning commuting hours near the Port of Tacoma. The crashed tanker began leaking gasoline after the crash, prompting emergency responders to close the road due to the risk of a fire. No injuries were reported in the crash, but work crews worked around the clock to cover the area with fire retardant, pump gasoline out of the tanker, and dig up fuel-soaked dirt.

A 14-year-old boy caused a three-car crash in Tacoma after he stole a vehicle and sped away from police. The pursuit ended when he rammed the car into two pickup trucks. One driver was injured in the collision. The teenager was arrested and booked into a juvenile detention facility.

A 17-year-old driver was injured after hitting a power pole near Rainier Avenue South and 51st Avenue South. He was taken to Harborview Medical Center with serious but non-life-threatening injuries. Police have not yet released details on the cause of the accident.

A car accident in Federal Way involved an RV, a car, and a box truck.

Photographs from the scene show a red car stuck beneath the box truck’s underride guard. According to witnesses, the red car was shoved under the box truck when the motor home slammed into the back of it. The red car then caught fire. The driver of the red car managed to escape the wreckage; a passenger was extricated by emergency responders.